At last, after a long gestation period, International has been reborn in Australia and T&TA was able to arrange the first drive of the new ProStar. Allan Whiting scored a drive in a demonstrator configured as a tipper dog and came away impressed.

Iveco inherited the ‘Inter’ legacy when it took over the crippled International Trucks Australia organisation in 1992. Since then Iveco has rationalised the product line-up from top to bottom, but two areas remain critical to the brand’s survival: the waste collection business and linehaul.

The venerable ACCO is still holding its own in the waste collection business, but you can bet that Iveco is working away in the background at an ACCO replacement – particularly given the Euro 6 customer push in that environmentally sensitive segment.

In the meantime, the Euro 5 ACCO is still selling well.

The linehaul position for Iveco is not so good. When B-Double regulations favoured COEs over bonnets in the 1990s Iveco’s prime mover range wasn’t up to the 60+tonnes task and then, when the rules were relaxed to allow bonneted trucks to compete, the Australian-assembled, part-Euro, part-USA Powerstar just didn’t capture the market’s attention.

Despite its driveability the PowerStar didn’t have the market appeal that earlier US-origin International S-Line and Transtar models did. With what we can imagine was some reluctance Iveco Australia went shopping at Navistar in the USA.

In 2004 the Australian company began producing locally assembled RHD versions of the bonneted Navistar 9000, with some success, but this cab was well past its use-by date, having been around since the 1970s.

Then came the shock introduction of the Cat Truck brand, in a joint venture between Caterpillar and Navistar that put paid to the Iveco/Navistar bonneted truck deal in Australia. The base for the 2008 Cat initiative was a completely new Navistar cab.

The Cat Truck brand was doomed only a year later when Caterpillar decided to withdraw from the highway engine business, but Cat Trucks continued to be sold in Australia until quite recently. The last ones went at bargain-basement prices.

The almost identical cab is now available with its original brand – International – emblazoned on the front.

Iveco is importing CBU Internationals at present, but we’re sure the company is looking to reset its Dandenong plant to assemble Inters, just like it did with the 9000 Series. 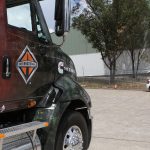 The Cat Trucks debacle has been a development windfall for Iveco, because what is now the 2018 International Prostar truck range has already had a good shakedown and has proved itself in the Australian market.

T&TA was the first Australian truck magazine to get behind the wheel of a Cat Truck demo model and we did it again with the International Prostar. We liked the Cat Truck and we certainly liked the Prostar.

Our International Prostar test vehicle was built on a five-metre wheelbase and topped with a Sloanebuit body. It was coupled to a matching four-axle dog trailer.

The truck was kindly lent to us for a day-long test by Sydney Iveco, who also decorated the rig with a cab and trailer wrap. I didn’t pass through truck traffic unnoticed!

Time was tight, because this active dealer has a string of potential Prostar buyers, so I didn’t need to do pre-trip checks: the Sydney Iveco mechanics had already done that and also checked the trailer connections. 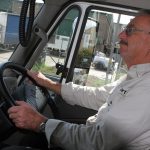 A quick familiarisation showed that the cab ergonomics were similar to the Cat version, but the fitment of an optional UltraShift meant more left leg room, thanks to the absence of a clutch pedal. Those who take a Prostar with the manual 18-speed will find left foot room somewhat compromised.

From western Sydney’s Arndell Park I did an empty run to catch up with local earthmover, Ray Barbagallo, who was happy to fill the tippers with gravel.

During the empty leg I took a wrong turn and discovered how manoeuvrable the Prostar could be. I had to perform a tight U-turn in an industrial estate intersection and the short-bonnet, tight-turning-arc Prostar handled the job like a COE would do.

Tippers spend plenty of time empty and I was impressed with the ride quality of this combination.

Automated shift quality from the UltraShift Plus was excellent, even without a load to provide momentum for smooth shifts. It wasn’t as smooth or as quiet as Euro self-shifters, but it worked!

The only downside of the empty run was the intrusion of loud, reverberating exhaust noise from unmuffled twin stacks, on the back wall of the cab. Do tipper operators really want twin vertical stacks?

Loaded to a gross mass just under 50 tonnes the Prostar and trailer obviously felt heavier, but performance from its brand new engine was outstanding.

The Prostar easily kept up with truck traffic while the flat-plane and spotter mirrors provided an excellent rear and side view of other road users.

Left to its own programming the box skip-shifted and let revs build up progressively as road speed increased. It grabbed a half gear upshift on an eight-percent grade without any driveline shock, in a situation where I’d have let a manual box stay in the lower gear.

On most highway climbs the automated box kept the engine in a ‘sweet spot’ around 1400-1600rpm, providing wind-resistance horsepower to maintain road speed along with grade-conquering torque. 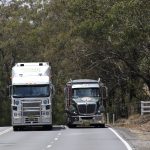 On descents I used manual mode to hold gears, while checking out the three-position engine brake that held back the 50-tonne combination reassuringly.

The service brakes weren’t so user-friendly, having a very firm pedal that made it easy to over-brake in traffic situations.

The cab felt very well made and had no bonnet shake or interior trim vibration. However, noise intrusion from the transmission and the aforementioned exhaust stacks needs to be addressed. An underframe exhaust should rectify the latter and some underfloor sound deadening would reduce mechanical noise, I reckon.

As tested, the Prostar Tipper cab/chassis came in well under the magic 300 grand mark – around 14 grand less without the UltraShift – and should find some eager customers.

Navistar has announced its first quarterly profit since initiating a turnaround plan more than three years ago. The company reported Q2 net income of US$4 million on revenues of $2.2 billion. This was despite the […]

NAVISTAR TAKES A HIT BUT SAYS BETTER DAYS ARE AHEAD

Navistar, parent company of the International brand recently reintroduced into the Australian market, has reported a net loss of close to $AUD95 million in the first quarter, but has raised its full year 2018 guidance […]

Navistar International Corporation has blamed a large write own of its used truck industry and poor new truck sales for its US$80 million loss in the second quarter, miles behind the $4 million profit the […]