A day at the wheel of Fuso’s new eCanter electric truck has given us an incredible insight into how city delivery work might like in the next five to ten years, with a lot less noise, a lot less pollution and some rapid acceleration. We plugged in to the controls of the eCanter and came away with an amazing insight into how electric trucks will work in Australian cities.

The big rigid tautliner sits next to us in the pouring rain at the traffic lights on Melbourne’s Dandenong Road, the thump and clatter of its diesel engine is reverberating through the cabin of our truck and it seems somehow louder than it would normally. That’s probably not surprising given our truck is making no noise whatsoever. You see we are in an electric truck.

Truck and Bus News had the privilege of being the first Australian media outlet to drive Daimler’s Fuso eCanter on Australian soil and here we were sitting waiting for the traffic lights to turn green to escape the incessant noise from that truck next to us. Even in the short time we had been behind the wheel of the eCanter we had quickly become used to the sounds of silence.

We’d climbed aboard the eCanter at Daimler’s corporate HQ in suburban Mulgrave with Romesh Rodrigo, until recently the head of product planning engineering for Fuso in Australia but now the senior manager of homologation and regulatory affairs. Romesh is a product guy and knows his stuff and we couldn’t of had a more enthusiastic and knowledgeable person along with us for this drive.

Fuso seems to be in the box seat in being a part of the Daimler Group which is throwing everything including the kitchen sink at zero emission transport including electric trucks and that was apparent to us when we had the chance to visit Daimler’s Freightliner electrification ‘secret squirrel’ works in the USA recently. Unlike Fuso, its rivals Hino and Isuzu are scrambling to answer the strong demands being made by some Aussie fleet customers who have an eye on green credentials and lowering emissions. Hino and Isuzu are both engaged in local programs with SEA using what are virtually ‘glider’ trucks that would be brought in without a power train and would be locally fitted with batteries and an electric powertrain.

Fuso and Romesh Rodrigo are at pains to point out that the eCanter and all of its electric trucks in development are integrated products, built from the start as electric trucks and not as a third party ‘conversion’ like its rivals.

From the outside the 7.5 tonne Canter doesn’t look too dissimilar to its internal combustion powered siblings, save for the signage on the pantech body and across the top of the windscreen proclaiming for all to see that this is a 100 per cent electric powered truck.

We meet the eCanter in one of the big sheds at the Daimler HQ surrounded by an array of shiny Benz cars and AMG hot rods. The truck is plugged into a charger installation that would not look out of place in a sci fi film or at a space agency.  The truck has been on charge all night and was ready to go with 100 per cent charge.

Climbing into the cab and again there is not a lot of difference to a diesel Canter. The cockpit is integrated, there are no add on screens or gauges, the electric system has been melded into the cockpit instrumentation. Plug the key into a slot down low on the right hand dash and then press the silver ‘start’ button and the dash lights up. Wait a second or two and it is ready to shift into drive. There is naturally no noise, no ‘engine’, no rattle of components, just the occasional click of a relay.

Once in drive you press the throttle just like a conventional truck and there is a smooth, instant and strong and insistent thrust forward. It’s the lack of noise that really grabs you, particularly in the first few second before the truck has reached cruising speed when there isn’t even any tyre noise.  The fact that after a while the tyre noise becomes the most intrusive sound as you glide down the road at 60 km/h tells you something about the absence of diesel engine noise. When was the last time you noticed tyre noise in a city delivery truck?  Don’t think for a minute that the tyres wee particularly noisy, its just that the lack of sound from an engine just leaves a silent void and that means you notice other noises 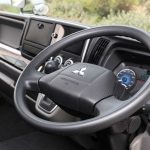 When we first moved off, the predictive distance calculator on the dash revealed that there was approximately 93 km distance available on this charge. That didn’t seem a lot, but as our drive unfolded we would be pleasantly surprised by the actual economy of the charge.

With one eye on that available distance we set out to not squander the power and while keeping up with the traffic we did not do anything too radical and did not give it too much right foot. Despite this the instantaneous torque was obvious and apparent.

At one stage as the rain poured from the sky we decided to see exactly how quickly the Fuso would accelerate away from the lights, partly to get away from that noisy rigid sitting next to us and partly out of curiosity.  Pushing down hard saw the eCanter squirm on the wet tarmac and slip slightly sideways as we shot away from the line, as we feathered the throttle to ensure we stayed under the speed limit and in control, the noisy truck disappeared backwards in our mirrors. How many times has the slow rumbling acceleration of a truck caused anxiety in getting across an intersection or clearing a turn with oncoming traffic rushing toward you? Well you can forget about that now, the eCanter has car like acceleration.

Fuso says the eCanter has 135kW and 390 Nm of torque, which comes from its six Mercedes-Benz, sourced liquid-cooled 360V, 82.8 kWh lithium-ion battery packs. Again that 390Nm doesn’t sound like a lot but in reality because it is delivered at peak from start up it has a totally different nature to torque delivered by a diesel.

The eCanter was rated at 7.5 tonne and in this form it delivers a three tonne payload with the truck having a 4.5 tonne tare weight. This is about 600kg heavier than a diesel equivalent but with technology racing ahead tech heads are fairly confident the weight of the batteries in particular will be reduced in time. Still most buyers in this market would not be too inconvenienced by the 600kg higher tare weight. 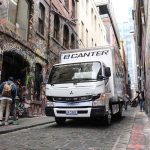 The truck we were driving was, what Romesh Rodrigo described as version 1.1 and newer incarnations and evolutions are coming, promising greater range, lower tare and better performance.

We did a big circle from Mulgrave in toward the Melbourne CBD, heading across to Port Melbourne and then down along the bay side suburbs before tacking our way back to Mulgrave. From pouring rain to bright sunshine Melbourne did its best to live up to its four seasons in one-day reputation. On the way we encountered heavy traffic, clear urban running sitting at around 60 km/h and plenty of stop start along the way.

Obviously there is no exhaust brake; clearly there is no exhaust, however there is a regenerative braking position on the left hand wand on the steering column. Engage this and not only do you help slow the eCanter dramatically but you also put charge back into those batteries. The retardation was amazing and it quickly became a contest to see how long we could resist touching the brake pedal. In the end this was hardly at all and one could imagine that brake pad wear would be minimal in real world operations, meaning another potential cost saving in running the truck day to day.

The eCanter is pegged out at around 90km/h maximum speed in the unit we were driving, which for city delivery truck was fine and did not present any problems during our test.

By the time we arrived back at Mulgrave the predictive distance metre was telling us we still had about 37km in the batteries on this charge and we had travelled 107.9km with about one third of total charge remaining in the batteries according to the charge gauge, the eCanter’s equivalent to a fuel gauge. Given it told us at the start that we had 93km range the distance reality should be better than 150km between charging.

With more charging stations on their way around the country, better range and lighter batteries likely to be a reality in the not to distant future and the potential for even better and more efficient electric motors, the eCanter version 2.0 and beyond will likely be even more impressive as time rolls on.

The fatigue inducing properties of noise are well acknowledged, so the fact is the eCanter will be a much more pleasant place for future drivers and will make life much easier, cleaner, less tiring and less stressful for drivers in the future.

What lies ahead in truck technology is still largely unknown but with developments like eCanter the future is both exciting and extremely bright.

MACK MAKES A MOVE FOR CLEANER RUBBISH IN THE USA

The push to greener electric trucks gathers pace across the globe with one of the longest established truck brands, Mack taking the wraps off what it claims is the US industry’s first fully-electric refuse truck […]

RIVIAN GARNERS MAJOR SUPPORT FOR ITS ELECTRIC VANS AND PICKUPS

US electric commercial vehicle start up, Rivian, has gained the attention of Wall Street  despite the fact that it is still only a private company. Rivian was valued at about $3.5 billion before Amazon announced […]

Volvo Group Australia has revealed that it intends to continue to distribute UD Trucks in Australia even after the impending sale of the brand to UD is completed late in 2020. Volvo Australia has issued […]