US based fleet management software review site Fleet Logging  has published a thought piece on its site recently which poised the question – what would prime movers and semi-trailers look like if they were designed by a supercar manufacturer.

Fleet Logging decided to imagine how supercar brands would style trucks  and started by identifying seven of the most popular supercar makers  and had its creative design team go crazy by drawing renditions of supercar-based big rigs.

First up  was Aston Martin,  a brand that is synonymous with the world’s most beautiful supercars and grand touring machines and of course as the chosen brand for the James Bond movie franchise.

For its Aston Martin truck Fleet Logging started with the Aston DB11 and took the familiar fascia including the gaping front grille and slim headlights, but significantly raised the angle of the hood to create a tall, wraparound greenhouse and then added DB11 alloy wheels.

Unlike the DB11, we highly doubt if our Aston Martin semi can rush to 100km/h in 3.7-seconds, it is a definite looker. 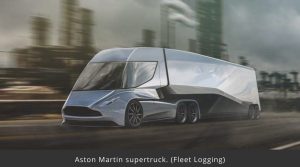 The Ferrari truck wouldn’t look amiss in the Monaco F1 paddock  with the front end of a Ferrari Portofino to create a rendition of a Ferrari semi-trailer.

The Ferrari Portofino is a true GT with a retractable hardtop roof to allow the driver to soak up some sun while having some proper driving fun and Fleet Logging seriously thought about creating a convertible truck like the Portofino, or a roofless semi, but decided to take the harder route and created a glass canopy with an upright yet expansive greenhouse. It’s a bit smaller than a conventional semi, but it is unmistakably a Ferrari.

Swedish hypercar maker Koenigsegg is  a relatively new brand and yet it’s seriously threatening the established marques with a mix of design, state-of-the-art engineering, and performance. For its Koenigsegg imagining, Fleet Logging chose the Agera for its inspiration. ‘Agera’ means ‘to take action’ in Swedish. Similar to the Ferrari truck, the Koenigsegg imagining is smaller and sleeker than an actual truck, but the biggest challenge was retaining the Koenigsegg’s helmet-shaped windscreen design, and the single wiper stalk rests quite aggressively in the middle of the windscreen.

Enzo Ferrari once said in one of his witheringly sarcastic quips, that Lamborghini makes very nice cars…… for a tractor maker! This was because, alas Signor Lamborghini made his original fortune making agricultural haulers. These days Lambo makes not just supercars  but super SUVs like its Urus. Thus was the inspiration for Fleet Logging’s Lambo truck.

Lamborghini says the Urus merges the soul of a sports car with the functionality of an SUV, so Fleet Logging took the front clip of the Urus including its gaping front grille, air intakes, and headlights, to create a tallish greenhouse with sharp lines  and equally sharp wheels and if Lambo ever created a truck, this would be it. 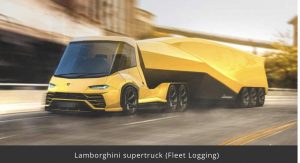 Fleet Logging said that for all the renderings the McLaren truck was one of the hardest to conceive, because the McLaren name is synonymous with racing and motor sports, and has never made a truck of any sort in its history. It didn’t stop Fleet Logging from benchmarking the 720S supercar for the McLaren semi.

All the familiar styling elements are present including the multi-spoke wheels and McLaren Orange paint, the larger than stock headlights and a trailer shaped to mimic the McLaren logo, which is in essence a kiwi, honouring the legendary company’s founder, New Zealander Bruce McLaren. 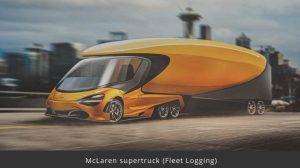 Italian carmaker Pagani has only made two supercars in its existence, the Zonda and the Huayra.

The Zonda  was used to create the Pagani inspired truck, specifically  the Tricolore which was originally designed as a one-off tribute to the Italian Air Force.

For the Zonda truck the hood is vertically-oriented to make room for a larger and taller windscreen, while slim quad-headlights  and bronze wheels have been included with a V-shaped accent on the hood,  and a distinctive  single wiper arm in the middle of the greenhouse to add a sporting touch.

You’ve never heard of W Motors? No neither have we  but that didn’t stop Fleet Logging, which used the UAE based hypercar company for its final truck imagining.

W Motors has two hypercars in its portfolio, the Lykan HyperSport and the Fenyr SuperSport. The former was featured in the Hollywood blockbuster Fast and Furious 7 and is one of the most expensive car to be featured in the movie franchise.

The W Motors semi, used the Fenyr SuperSport as its inspiration taking the front clip and added a tall and rakish windscreen derived from prime movers sleeper cabs. From some angles, the W Motors semi resembles a sentinel with 22 wheels and some pretty unusual angles. It’s not the prettiest of the renderings but yet another focus on what a truck might look like in the future. 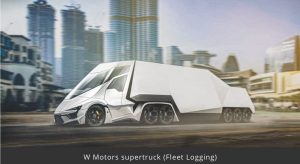 The Australian truck market continued to boom in October with some of the best sales figures seen since the GFC, eight years ago. In fact it was best October sales figures since the T-Mark system […]