Isuzu has launched the latest incarnation of its immensely popular top selling N Series range  with a bold claim that  it  is “the safest Isuzu ever developed for Australia”.

The new Isuzu N Series is late to the safety party and one would expect that coming to the market with a safety package well behind is two Japanese rivals, that it  would allow the Australian market leader to achieve that claim. But the fact is that all three brands now offer very safe trucks.

That is not to say that the new N Series is not a very safe range of trucks, just that it has joined  the other Japanese makers in delivering a safety package that clearly the industry is demanding.

At the 2019 Brisbane Truck Show, Isuzu executives told the trade press that they didn’t believe that Isuzu customers were prepared to pay for the full safety suite that its opponents had recently introduced.  However that was three years ago, and the world changed, and clearly the sales improvements the safety packages have delivered to Hino and Fuso surely indicated to Isuzu management that customers are prepared to pay and want the benefits the latest safety tech delivers.

Isuzu didn’t get to the top and maintained market supremacy for  the past 33 years or more by maintaining the status quo or ignoring market signals. The Isuzu team are a savvy bunch and they obviously saw the writing on the wall. It is just a great thing that all three Japanese truck makers now have similar levels of safety.

While the launch of the new N Series came at the end of  the lockdowns, it was still too difficult to hold an actual media event live, so like so many other truck makers over the past two years, Isuzu hosted a virtual online event.  We are all praying that very soon we will be able to be in the same room with truck company bosses  to pick up the nuances and be able to fire questions face to face rather than screen to screen

The N Series is a critical truck for Isuzu, delivering the greatest volume and  helping it maintain a massive advantage over its light and medium duty opponents.

The heart of the new N Series improvements is its suite of advanced safety technology and driver aids which the company is calling Isuzu Intelligent Safety. However along with the safety systems there are also improvements to towing capacity on some models, a revised interior and an expanded offering in Isuzu’s Ready-to-Work range, with a new tipper and another Tradepack model with more models expected next year as well and a new six year warranty. 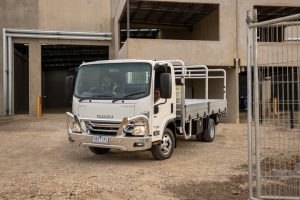 The essence and nerve centre of ADAS is based around a Hitachi stereo 3D camera, which Isuzu claims is very accurate in object detection, as well as speed and depth perception in daylight or night operation. Fuso and Hino both use a radar and camera combination and arguments will rage on about whether the dual lens system is better than the radar camera operation, but it is clear both do the job we understand. 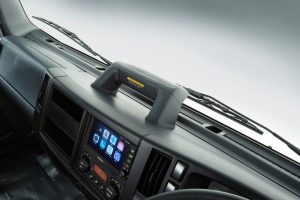 The Isuzu dual-lens Hitachi camera is mounted inside the truck’s cab in a central dashboard position and isn’t attached to the windscreen which Isuzu says ensures it doesn’t obstruct the driver’s view.

Isuzu claims this system works better in urban operations, with the camera delivering a better field of vision detecting objects at a lower-height  like children and animals while driving, again emphasising that it is tailored to operators working in urban operations.

The dual lens camera system informs  the control of the Advanced Emergency Braking system and the Forward Collision Warning (FCW)  which Isuzu says is better at detecting and judging depth perception with  three-dimensional objects like vehicles, pedestrians and bicycles.

The Front Collision Warning system will alert the driver If the FCW system determines a collision is likely, and depending on the scenario in front it will deliver either audio and visual alerts,  before  the autonomous braking system kicks in to help avoid or at worst ameliorate the effects of a crash 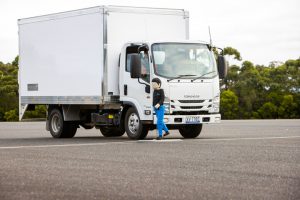 The new Isuzus also get Lane Departure Warning which is run through sensors detecting and monitoring the vehicle’s path down the road and the lane markings and road edge. The system again sounds audible and visual alerts if the truck begins moves across line markings or across the road edge.

Isuzu says its new Distance Warning System (DWS) will ensure the truck is maintaining a safe distance from the vehicle ahead with the ability for the driver to pre-set a minimum distance  setting that suits the  application and environment. The company claims the system has been ‘intuitively programmed’ to rule out a constant barrage of alarms at low speeds and in dense traffic and only kicks in at speeds over 30km per hour.

There is also TMW or Traffic Movement Warning which monitors stationary vehicles ahead and alerts the driver when forward traffic movement is detected more than five metres from a truck’s stopped position.

The other key component in the intelligent safety suite on the  new N Series 4×2 range is its Auto Lighting System (ALS which automatically adjusts headlight and taillight brightness to meet changing conditions.

Some models in the new range also include a customisable speed limiter which can be set at the dealership), while there is also a new cab-tilt warning device, along with suspension seats in selected narrow-cab models.

The latest incarnation of its 4×2 N Series trucks will offer operators not only the brand’s famous promise of reliability, but the next generation of truck safety with the introduction of.

There are a number of other features and cosmetic changes to the range, particularly in the cabin, including new seat cover material and cabin appointments, while  there is  also a new CAN converter circuit and connector, making it easier to fit a fleet management or telematics system. Ironically Hino announced last week that it  would be adding an integrated telematics system to various trucks in its line up. 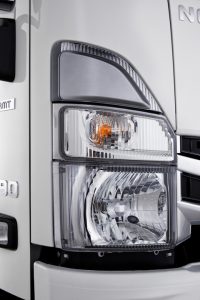 While the exterior hasn’t  changed dramatically there is a new  headlight assembly including integrated foglamps and a different overall appearance.

“Isuzu’s data shows that most businesses needing a light-duty truck operate in urban settings, including freight movement in cities and residential areas, business-to-customer service or delivery, and operators needing their trucks on site within metro areas,” Spaltman said.

Isuzu has also adjusted the towing capacities by up to 500kg with the new N Series offering up to  4,500kg for models fitted with 4HK1 engines ( including the NPR, NQR and NPS models), and 4,000kg rating for all other models in the range.

Isuzu claims its dealers will match the towing increase with genuine towbars and a selection of 50mm or 70mm tow-balls rated to the truck’s capacity as an optional accessory.

The light end of the market has always been sensitive to  the need for bodies to be added to cab chassis models and Isuzu says it is continuing to expand its range of  Ready to Work  models  that come equipped with a range of bodies  including  tipper, traybacks, freightpacks and tradepack line-ups expanded, while saying more models are on the way next year.

“We are pleased to offer customers the next generation of safety in light-duty trucking with our updated N Series range,” Isuzu’s national sales manager, Les Spaltman said. 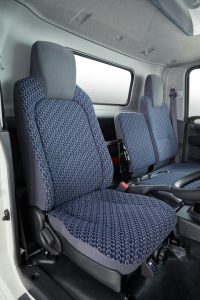 “In terms of work-smart features to keep drivers safe and comfortable, and capacity to get the job done, we believe operators will see a huge difference between owning a new Isuzu N Series truck compared with any other similar truck out there,” he added.

We will be aiming to give you a rundown of the driving and performance of the  new N Series range as soon as we can climb aboard the trucks for a steer.

Swedish electric truck start up, Volta Trucks has announced that it will launch its first full electric truck, the Volta Zero in an online launch event on the 3rd September. The new truck will be […]

The truck sale boom continued in April with heavy-duty sales in particular leading the way. April truck sales totalled 2,757 for the month, 157 units less than the outstanding figures for March but well ahead […]

The NSW Liberals and Nationals’ commitment to upgrade regional roads and bridges would improve safety and reduce costs for consumers and exporters, the CEO of the Australian Trucking Association, Ben Maguire, said today. NSW Deputy […]