The official opening at Gold Coast Isuzu is the culmination of te company’s ambitious expansion plans with a new purpose-built, 6,000-square metre truck centre on a 4.4-hectare site at Arundel.

Gold Coast Isuzu is a part of the Frizelle Automotive Group, founded by James Frizelle and now operated by son Brett and daughter in law Rebecca Frizelle. The group recently joined forces with the Sydney-based Warren Group, combining two of the largest family-owned automotive retailers. 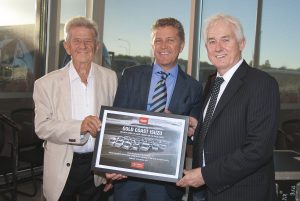 IAL says Gold Coast Isuzu is a flagship for the company particularly in aftersales care and customer relationship management which it describes as the next battlefront in the automotive industry.

“The new dealership has been an example of how to build a successful operation on the back of outstanding service and relationship building, said Phil Taylor at the opening of the new facility.

“Using Isuzu’s Dealer Excellence Recognition Program as a barometer, I can confirm that Gold Coast Isuzu has been a perennial achiever, qualifying no less than 15 times in the last 18 years.

“Such a long and consistent stint of success is built upon deeper customer relationships. This ‘people-focussed’ approach extends to the dealership’s workforce as well,” Mr Taylor said.

“With infrastructure investment on the Gold Coast up, the city is growing rapidly, and we fully expect Gold Coast Isuzu to take advantage of that situation by continuing with their outstanding customer care in this brilliant new facility.”