Kenworth has launched a new generation conventional truck that it believes will enable it to help fend off the onslaught of European truck makers while still serving its loyal and devoted customer base.

The new T610 was unveiled in front of close to 400 customers, dealers and the media at the company’s Bayswater manufacturing plant in Melbourne’s east on Saturday night.

Kenworth says the new T610 and T610 SAR are a result of more than 100,000 Australian design hours and more than ten million kilometres of testing and validation. The new truck is the single largest investment in product development the company has ever made in Australia.

Truck and Bus News was one of the first media outlets in Australia to sample the new T610 and T610 SAR, piloting both trucks over a 200 km route through the outer suburbs and country side north of Melbourne and can report that the work has produced two vastly improved prime movers boasting better steering, visibility,vastly improved ergonomics and a much roomier and more user friendly cabin.

While our drive was relatively brief it showcased the vast array of changes and improvements local Kenworth engineers have made to take Kenworth to a new level, if you believe the marketing slogan Paccar used for the launch it has taken them to the ‘sixth dimension’.

The improved steering is the most obvious change when driving. It is more direct, has better feel and is more forgiving on choppy tarmac. This is partly thanks to a new straight steering shaft that is able to take input direct from the wheel to the steering box with a single shaft and joint. even in the SAR a new mitre box system, a system borrowed from Paccar’s Euro subsidiary DAF, has been used to overcome the challenges of the set forward axle and slightly different configuration. The result is very good steering

The trucks are quieter and a lot more pleasant to travel in and should win buyers over from some of the Euros while not alienating any of the current Kenworth tribe.

We will have more details and driving impressions in the months to come and a full report in Transport & Trucking in coming issues.

The T610 and T610SAR boast an all-new dash that really hauls the brand into the 21st century, with a layout and design that is the equal of anything in the market. 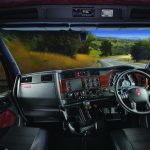 While the trucks look more ‘evolutionary’ rather than revolutionary at first glance they are in fact considerably different, more aerodynamic and smoother with better cab rigidity and finish. However when seen alongside older models the changes are very apparent.

Kenworth says the trucks have been designed from the inside out taking the original US models they were based on and making a huge number of changes and adaptations to tailor them for local conditions. The company claims the new cabin is centred entirely on the needs of the driver, with greater foot space, more standing room and storage, wider walkthrough access between the seats and more expansive door and windscreen glass and we can only agree.

“The core of this project was about building a bigger cab but it’s really about creating the ultimate driver environment,” said Brad May, PACCAR Australia’s Director of Sales and Marketing. Brad acknowledged the driver as being the most important asset of the truck.

The all new 2.1m wide cab is almost 300mm wider than the outgoing cab, with the engineers having also pushed the cab 300mm forward over the engine to meet Australia’s stringent length laws.

Kenworth Australia started work in tandem with a US program to determine the feasibility of building a new Australian truck almost six years ago when a team of Kenworth Australia engineers immersed themselves in all aspects of the US program working to develop an Australian, right- hand drive version. After building a virtual concept model and a physical prototype, the truck was given the ‘green-light’ in mid-2012 to go to market.

“In all, ten prototypes have been on the road with Kenworth customers testing the product, and the feedback to date has been overwhelmingly positive; the truck drives better than anything else they’ve driven, and drivers feel in command”, continued Ross.

“It’s a massive project that’s been undertaken by a team of Australian designers and engineers. The T610 has some new materials as well as new processes and techniques that our current trucks don’t utilise, which has required different people to be involved with different design and engineering skill-sets, as well as different approaches” Brad May stated.

“When you look at it come to life, you just think ‘wow’, and that’s an amazing effort for a small team. I really hope everyone who has worked on the T610 feels great pride now this truck is released.”

Tasked with creating the ultimate driver experience, the T610 design team first enlarged the cabin envelope achieving the optimal lengths needed for maximum payloads in Australia they  moved the entire cabin 300mm further forward on the frame than the comparative US T680 model, to provide Bumper to Back of Cab (BBC) dimensions that meet Australian length laws.

The firewall and floor have been completely new designs to suit right-hand drive short BBC applications.

The new cabin boasts new triple sealed doors and door apertures—minimising noise and dust leaks and it is pretty obvious when opening and closing the new doors, this is not like any Kenworth that has come before, the doors close with a pleasing thud and it is clear these trucks are oozing quality.

The bonnet design of both the T610 and T610SAR is firmly grounded in Kenworth heritage and are both manufactured in Australia  with a stainless steel and mesh grille with the Kenworth badge sitting proudly on top.

New bright, projector-style lights with halogen high beams adorn the Aero bonnet of the T610  while on the SAR, the standard package comes with 4×7 inch round lights with two outer H4 Hi/Lo Halogen and the two inner H4 Hi beams.

The new aluminium core radiator is 100kgs lighter than its copper brass equivalent and provides a level of cooling performance that betters many of Kenworth’s existing model line-up and facilitates the full range of Cummins X15 power ratings, with power ratings up to 600hp and 2,050 LbFt of torque, making it a suitable for a wide range of transport applications.

The T610 ‘s Cummins X15 Euro V engine also boasts  Advanced Dynamic Efficient Powertrain (ADEPT) technology with a suite of electronic features that interact with Eaton’s automated manual UltraShift transmissions and which dynamically adapt to conditions for fuel efficient operation with no impact on productivity.  Manual RoadRanger transmissions with a range of torque ratings in 10, 13 and 18 speed variants are also available.

T610 is suitable for virtually any application, including maximum payload 26-metre B- Double and road train configurations while the T610SAR with set forward front axle is  ideal for 19-metre B-Double, or tipper and dog applications.

The new models can be specified to a GCM rating of up to 140t with engineering application approval, and with both a set forward and set back steer axle option, can meet a range of PBS applications.

Kenworth Airglide 460 airbag suspension is standard, and depending on the proposed application of the vehicle, a variety of optional rear suspensions can be specified, such as the Kenworth six-rod mechanical suspension and Neway options.

The T610 is also available with the latest collision avoidance and mitigation technology, including active cruise with braking and lane departure warning adding to the improved safety package within the new trucks.

“We have a whole lot of things we still want to develop in order to offer our customers all of the options and flexibility they want and know we  can give them,” said Brad May.

As far as Truck and Bus News is concerned at the very least it is a great starting point and we believe the T610 will win plenty of friends int he truck buying market with its mix of US muscle and Euro sophistication. As one wag was heard to say  on Saturday night,”is this what happens when you leave a T409 and a DAF in the shed overnight?”. One can only wonder.