French maker Peugeot will continue its re entry to the light commercial vehicle market with the imminent arrival of  its small Partner and large Boxer vans, which arrive to join the previously launched Expert.

The Partner is se to go toe to toe with the VW Caddy and French rival Renault’s Kangoo and will be priced from $25,490 plus on-road costs when it lands in the next few weeks.

At the other end of the burgeoning van market  the Boxer large van that will fight it out with the Benz Sprinter, VW Crafter, Renault Master and Ford Transit later this year, with Peugeot announcing that it will be priced from $47,470 when it goes on sale in the coming months. 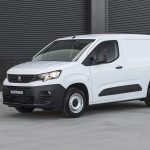 The passenger car based Partner will be available in three grades  including a long wheel base version with turbo diesel engines and a short wheelbase model with petrol power.

An 82kW 1.2-litre turbo-petrol three-cylinder engine powers the entry level front drive short-wheelbase Standard 110 model which comes standard with a six-speed manual which is priced from $25,490, while the Standard 130 delivers 96 kW and 230Nm from the same 1.2 litre petrol power plant and is coupled to an eight speed auto with pricing from $30,990

The long wheelbase version gives buyers an added 350mm in overall length is powered by an 68kW/230Nm, 1.6 litre turbo diesel and is only available with a six speed manual with pricing from $29,990.

Peugeot says the Partner offers an impressive 1000kg payload  for all three models while cargo volume is 3.8 cubic metres  for the standard wheelbase  and .9 cubic metres for the long wheelbase version.

In the big van sector the Peugeot Boxer will only be available with a two-litre, four-cylinder turbo-diesel boasting120kW of power and 310Nm of torque at a very useful 1500rpm, however it will only be  available with a six speed manual transmission. It will, however  exclusively to a six-speed manual be offered in standard or long wheelbases variants, with pricing for the shorter wheelbase starting at $47,470 and $48,990 for the longer wheelbase.

The first glimpses of the 2017 Crafter have been released by Volkswagen ahead of the van’s official unveiling in September. Crafter is the largest of Volkwagen’s offerings, rivalling the Mercedes Sprinter and will use a […]

A NEW BRICK FROM THE GREAT WALL