Hino is dropping subtle or not so subtle hints that the second part of its updated 500 series range is about to arrive down under.

The Hino 500 Series Standard Cab range will arrive here in mid November joining the Wide body range, which was launched in early 2017 and Hino has been issuing ‘sneak peeks’ of various aspects of the new Standard cab over recent weeks.  This week it revealed some more detail.

In reality the Standard Cab was revealed on the Hino stand at the Tokyo Motor Show 12 months ago but it all adds to the marketing intrigue and local market anticipation.

“As part of our global commitment to QDR, we have undertaken years of development and planning which included thousands of kilometres of testing in Australian conditions,” said Daniel Petrovski, Hino Australia’s manager of product strategy.

“To differentiate ourselves in the competitive medium duty segment, we need a product that delivers the quality, durability and reliability that Hino trucks are renowned for – that’s why our testing is so extensive and is done both at our proving grounds in Japan, and in real-world conditions here in Australia.

“We have quietly been running the new model’s engine and driveline in local conditions, covering thousands of kilometres in a variety of operating conditions,” said Mr Petrovski.

Further underlining the durability of the Hino 500 Series Standard Cab is the Hino Dakar Rally program, which is as much about proving reliability as it is about chasing competition success. 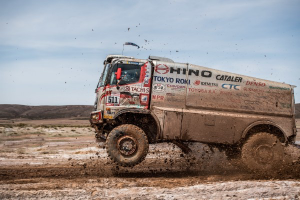 “Nowhere is QDR more apparent than in our Dakar Rally program, where we celebrated our 27thconsecutive finish and 9th successive class victory in the 2018 Dakar Rally.”

Known as the “Little Monsters”, the Hino Dakar Rally 500 Series vehicles regularly compete against and beat larger racing trucks with engines that have twice the displacement of the 500 Series A09C 6 cylinder engine.

“It’s always great to win but the Dakar program is a platform for developing and proving new mechanical and technical components as part of our technological innovation,” concluded Mr Petrovski.

Truck and Bus News is heading to Japan in a few weeks to take a look at the new Hino, to see how it was developed and where it is made and to also have a ride in the Dakar truck and we will report back to you our readers.

Full Australian specifications and pricing of the all-new 500 Series Standard Cab FC, FD and FE models will be available in late November 2018 at dealerships nationwide and online at hino.com.au.