Renault has launched its all-new range of Trafic vans with strong pricing, a good spread of models and new engines, but no automatic transmission.

Truckandbus.net.au sampled the new range of French cargo carriers at the launch in Adelaide and can report that it is a confident and accomplished workhorse with strong credentials in terms of performance, handling, efficiency, cleverness and capacity, however the lack of a self shifter may prove a challenge for Renault’s local team in a market where many fleets are demanding automatics.

We don’t want to labour the point because the Trafic is a very good van, however with the previous model featuring an automatic, which accounted for 40 per cent of its total sales, the task of equalling the impressive sales figures and growth of that superceded model will be a challenge.

Renault took the previous Trafic to number three in its class last year in Australia, behind the market leading Toyota HiAce and Hyundai’s iLoad, with the Renault capturing 1643 sales and 10.3 per cent of the mid size van market.

The new Trafic has a lot going for it, particularly in terms of its dynamics and performance from the seriously impressive 1.6 litre twin turbo diesel. There is also single turbo dCi 90 diesels, which is the entry level engine, however we only had the chance to drive the 140 kW/370 Nm dCi 140 twin turbo during the launch program. Mated to a very slick six-speed manual the Trafic handled the variety of Adelaide city, suburban and outer urban roads on the way to and from the Barossa with real aplomb. While its two main rivals from Toyota and Hyundai have much bigger engines (2.5 litres for iLoad and 3.0litres in the HiAce), the little Renault 1.6 twin turbo well and truly holds its own, and in fact produces an a substantial 24 kW and 54 Nm more than the Toyota and 4kW and around the same torque as the Hyundai.

The French power plant also boasts frugal fuel consumption with 6.2 litres per 100km, that’s 2.1 litres per 100 better than the previous Trafic. The bottom line is a van that performs strongly, accelerates hard, is quiet, smooth and even with 300kg load on board along with a driver and passenger adding close to another 200kg it handled the rolling terrain of the Barossa, Eden Valley and Adelaide Hills easily and without fuss.

Handling was another strong point. The Renault engineers have gotten the damping just right, firm but not to hard and with very direct and communicative steering it’s easy to forget you are driving a van. It is also very quiet, and the driving position is very good with excellent vision and comfort.

The new Trafic is full of clever ideas, from the nifty fold down middle seat that turns the areas adjacent to the drivers seat into a work desk, with a detachable clipboard, optional phone and tablet cradles and a plethora of cup holders to a range of cargo stowage ideas and features behind the solid bulkhead in the load area. The standouts are the flaps built into the lower bulkhead that open up to deliver extra length up to 4.55 metres in the load area for long items like pipes and conduit. 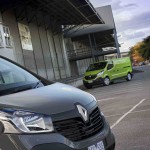 There’s also plenty of tie down points and looks in the load area adding to the versatility. The cabin area has an impressive total stowage capacity of around 90 litres across 14 bins, trays and cubbyholes ranging from 0.2 to 54 litres designed for the everyday items business users have to stow, from drink bottles, cans and cups to mo

bile phones, tablets, notebooks, pens, hard hats and boxes. The largest and cleverest stowage is situated beneath the front passenger bench seat of the Twin Turbo models and boasts a capacity of 54 litres.

Excellent all round vision is another feature with Trafic’s reverse-camera displaying its image in the rear vision mirror It also has a large rear window allowing great rear view when not fully loaded, while the side mirrors have convex twin-section glass. It also has an additional large mirror behind the passenger sun-visor that offers an extra wide view down the passenger side. The Trafic comes in two lengths either the short wheelbase L1 or the longer wheelbase L2. The 3098mm wheelbase L1 boasts 5.2 cubic metres of load space with a 3.75 m cargo area length while the 3498 mm wheelbase L2 has 6 cubic metres in its 4.15 metre long cargo area.

There is a full suite of electronic driver aids including ABS, ESC, anti rollover protection and load adaptive control as well as hill start assist.

Three option packs are available, the Pro Pack, Premium Pack and the Lifestyle Pack at $1290, $1990 and $2490 respectively. The Pro Pack bundles driver and passenger lateral airbags, wide-view mirror, phone cradle and full plywood cargo lining along with an anti-slip timber floor.The Premium delivers the same as the Pro Pack save for the ply lining and anti slip flooring, but also gets a 7″ touchscreen multimedia and navigation system with an Arkamys sound system radio, 17-inch alloy wheels and cloth upholstery and premium dash, along with a few other aesthetic goodies. The Lifestyle Pack has all of that plus heated seats, Automatic climate control, hands-free key card, body coloured front bumper, body coloured rear light column and body coloured door rail.

Regular warranty is three years and 200,000-kilometre warranty and Renault’s is offering capped price servicing for $349 per calendar year for the first three scheduled services. Trafic has 30,000km service intervals or one year whichever comes first, meaning minimal downtime and low running costs, which Renault reckons will increase the Trafic’s market appeal, as will the special launch offer of a 5 year/200,000km warranty for vans purchased in May and June.

Pricing is very competitive with the entry level L1 H1 featuring the single turbo dCi 90 at $33,490 before on-road costs. The single turbo engine is only available in the L1. Moving up the L1 H2 with the twin turbo dCi 140 will set you back $36,990 plus on roads while the long wheel base L2 only comes with the twin turbo 140kW donk at $38,990 plus on roads. Its very competitive pricing and should keep the Trafic in the game, but it would be better placed in the game if there was an automatic option.

We feel certain Renault Australia MD Justin Hocevar will be beating a path to HQ in Paris with the request “auto si’l vous plait?”. Lets hope for his sake and for the sake of Aussie van buyers that the French eventually answer “oui!” at some point in the future

Mitsubishi is back in the van market after a six year hiatus, thanks largely to the fact that the company is now part of the Renault-Nissan- Mitsubishi Alliance, a factor which has given it access […]