A Tesla Semi electric truck prototype has been spotted doing some range tests with an almost full load of 34 tonnes (75,000 lbs), and its test driver says that  it met or even “exceeded”  its range expectations.

However, CEO Elon Musk said that they have found opportunities to extend that range during testing.

Musk did claim last year  that the Tesla Semi production versions would have a range closer to 1000km of range.

A Tesla Semi prototype has been spotted at a California Highway Patrol Inspection Centre during range testing and the test driver reportedly said that the electric truck prototype was “meeting or exceeding the range estimates.”

A California Highway Patrol centre at HP Donner Pass said the Tesla was out and testing its new electric prime mover. 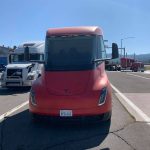 “Tesla is out testing the new electric truck tractor. The driver stated the concrete blocks are for testing purposes only and ccording to the driver, the truck is operating at approximately 75,000 lbs (34 tonnes) and the truck is meeting or exceeding the range estimates. Electric trucks are definitely the future. We look forward to seeing more electric trucks on the road,” said the CHP on its Facebook page where it also posts photos fo the truck.

The Tesla Semi was first supposed to go into production in this year, but recently delayed the launch ofd the production models until the end of 2020. when more electric trucks are expected to be on the market at around the same time.

If Tesla Semi gets anything close to 800km of range with a full load or close to full load, it would be an incredible achievement.By comparison, Daimler’s Freightliner eCascadia has a range of  about 400km , according to Daimler.

If Tesla can keep up with its range expectations and its promised price points, it would be an extremely disruptive force in the transportation sector while the cost of operation would be way down, and that’s the most important thing for fleet operators.

Only time will tell if the company’s projected performance can be achieved.

Hino is set to give an all new modular electric vehicle platform its world debut at the Tokyo Motor Show later this week  which the comkpany says will give an exciting glimpse into the future. […]