The bi-annual IAA truck show in Hannover has been  run and done for another two years and  we decided to take a look at some of the highlights and  some of the standouts that came out of the show.

One of the things that did emerge was a strong Turkish  theme with the Ford F –Max, built and developed by Ford Ottosan, the Turkish subsidiary of  the Blue Oval, stealing the lime light  not just with its launch at the show but also the fact that it beat many fancied Europeans, including Mercedes’ new Actros to the major truck industry gong.

The F-Max took everyone by surprise,  for while Ford made no secret of its development it did not go out of its way to publicise the Turkish built prime mover. The fact that it won International Truck of the Year made people sit up and take notice. It is a striking looking truck,  contemporary and well designed  with lost of features that put it on par or ahead of the European makers. 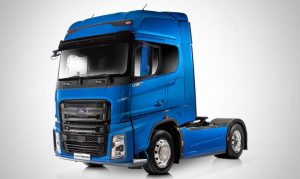 Remember that the Ford Transit we see here in Australia is built in the same Turkish plant that will produce the F-Max, with string quality credentials and price competitiveness thanks in part to the devaluing Turkish Lire.

If the F Max wasn’t enough Ford blew the other truck makers away with its futuristic take on what prime movers will look like in years to come with its F-Vision.

The Ford F-Vision Future Truck is a sleek, silver concept truck  which aimed to portray an autonomous commercial vehicle.  Ford says the F Vision was inspired by Marvel comic books and hints at Ford Trucks’ vision on electrification, autonomous and connected drive, lightweight and zero-carbon emission products. It’s the first concept Ford Trucks has made and had plenty of attention throughout the Hannover Expo.

Essentially, the vehicle is a design study. There’s no indication there will ever be a production version. But there’s no doubt the concept is an eye-catcher that points to the future styling of heavy-duty trucks.

On a totally different bent Volkswagen showed its ID Buzz Cargo electric van concept. It has the same iconic styling that traces back to the California surf vibe of the 1960s VW microbuses but optimised as a rolling workshop, mobile office or delivery vehicle.

The van was developed as a joint project by VW’s passenger car and commercial vehicle divisions and can be configured with different size battery packs to meet a variety of uses and mileage ranges. It is part of a family of electric vehicles the German automaker is bringing to market. 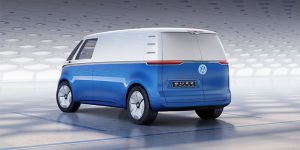 Volkswagen says it plans to put the electric van on sale by 2022 in North America, Europe and China.

Cummins again signalled that it is looking to ensure its long term viability as a power train developer and manufacturer and not just a maker of diesel engines.

The US company’s main draw card was its PowerDrive electric hybrid utility truck housed in a Kenworth T370 to demonstrate the fact  that  the drive line can be  adapted to a variety of  trucks and types. 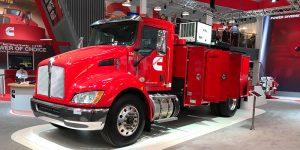 The  US Class 6 truck was configured with exportable electric power to recharge other vehicles, a recovery crane operating on either electric or diesel engine power. Cummins says it boasts an 80km pure electric reducing emissions by up to 80 per cent compared with conventional diesel-powered vehicles. According to Cummins fuel bills can be reduced by between 40 and 80 per cent depending on the drive cycle.

Mercedes showed its new model Actros officially for the first time at Hannover and many believed it would win the coveted truck of the year , however despite some strong innovation it was upstaged by Ford’s F-Max. 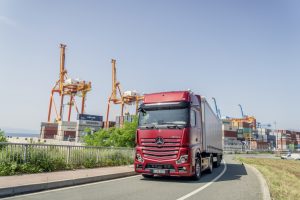 systems  being advanced and updated and evolved rather than breaking new ground. The one exception was its futuristic Mirror Cam, a system replacing external glass mirrors with a camera and rectangular vertical LED screens n each A pillar showing  the rear view images to the driver. The aim is to cut the drag caused by conventional external replacing them with an aerodynamic pod containing cameras delivering sharper and more accurate information to the driver. 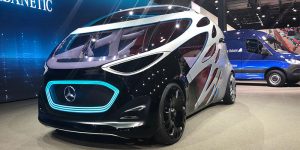 Also under the Daimler umbrella, Mercedes-Benz Vans’ displayed its revolutionary Vision Urbanetic mobility concept. Some believed it to be the most visionary vehicle at the show and is the first step in a line of autonomous commercial vehicles the German automaker plans.

The Urbanetic uses an all-electric chassis that can switch functions depending on what body is coupled to it, allowing it to either move people or transport goods. It can even switch functions during the course of the day. It also can be shared by companies based upon their needs and time of use.

The passenger version is a sleek teardrop with a lounge interior. In its cargo configuration the vehicle carries a van-like pod.

Mercedes-Benz is about to start tests of systems that will go into the vehicle on mules in enclosed campuses and plants. It also is starting a unit within its vans division to fully develop and commercialize the Urbanetic line.

Another Turkish stand out was the Karsan Automotive Industries’Atak electric bus. It is latest from the Turkish commercial vehicle maker, joining its smaller Jest Electric sibling as the second collaboration between Karsan and 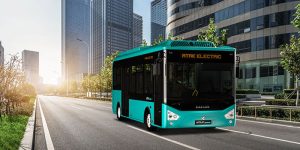 Karsan sells commercial vehicles in 20 countries and along with its U.S.-based partner Morgan Olson is a finalist in the competition to develop and source the next-generation mail truck for the United States Postal Service.

Another Turkish truck maker to make a splash was BMC Automotive Industry revealing its all new Tugra range of heavy trucks . 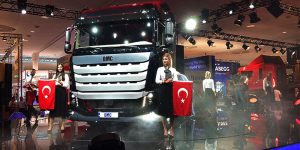 A versatile and modern truck the Tugra has been developed in seven configurations, from construction to long-haul. The cab-over truck has an imposing front design with an eye catching grille and a wide stance. The truck was another Turkish delight and also took many by surprise in Hannover .