Volvo bus has announced the launch of what it has dubbed a ‘self -charging’ bus, the new Volvo B5L S-Charge.

Volvo is calling it a self charging bus, but in basic terms it is an extended range hybrid, that can now drive silently and emission-free on electricity at higher speeds and cover longer distances than hybrid buses previously were capable of.

In a move that it hopes will win over major government and private route bus operators looking to lower emissions bus solutions in Australia, Volvo is backing the hybrid technology ahead of full battery electric buses, on the basis that  the S-Charge delivers many environmental and emission advantages, but at a much lower infrastructure cost, carbon footprint and overall environmental impact than a full electric

Volvo says the B5L S-Charge delivers ‘an environmentally sustainable electric solution to the Australian market that is ready to be deployed immediately’ and emphasises  that unlike pure battery electric buses the new B5L S-Charge doesn’t require a wait for additional infrastructure to be built for charging.

This means that a typical city bus depot  that might be home to several hundred buses  would require huge infrastructure costs and huge imposition on the power grid if  the entire fleet was changed over to battery electric power. However the S-Charge concept will deliver a much lower carbon footprint without the need for large scale grid upgrades and charging infrastructure costs.

Håkan Agnevall, President of Volvo Buses globally  says the new S-Charge model is one of Volvo’s cleanest buses and will reduce the carbon footprint by up to 40 per cent compared to equivalent diesel buses.

“The Volvo B5L S-Charge can also drive on biofuel, reducing CO2-emissions even more. It is probably the most fuel-efficient and reliable self-charging bus on the market”, said Agnevall.

The B5L, as the name would suggest uses a 5-litre turbo diesel engine, an inline four cylinder power plant, which is almost half the capacity of  the engines Volvo uses in most of its pure diesel route buses, which are generally fitted with a 9-litre engine. However with the S-Charge Hybrid system with its electric motor drive and/or assistance, its bank of batteries and the  capability for regenerative charging, the B5L is able to use a smaller and more efficient internal combustion engine that uses less fuel.

In an extended interview with Coach & Bus magazine, that will appear in the next print edition, Volvo Bus vice president for the Asia Pacific region, David Mead said  that  while there is a strong push towards electric vehicles within the Australian market, electricity generation in itself has a substantial carbon footprint and is saying that, the measurement of “well-to-wheel” becomes an important factor to determine the true impact of a vehicle’s carbon footprint.

“Well-to-wheel is the sum of emissions released from the production of energy such as extracting oil or generating electricity to the vehicle being driven, “ said Mead.

Here in Australia it means, applying the well-to-wheel methodology, that the Volvo B5L S-Charge produces a lower carbon footprint than many grid charged electric vehicles and that is especially true for New South Wales, Queensland and Victoria. 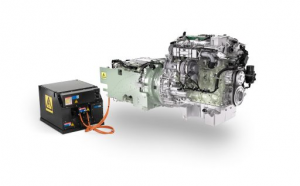 “We are now expanding our customers’ possibility for harnessing the benefits of electric power while at the same time retaining the impressive flexibility offered by hybrid buses. The new S-Charge model can be deployed on almost any route since no charging infrastructure is needed, which enables fast implementation and improved operational efficiency for our customers”, Agnevall added.

For outgoing general manager of Volvo Bus Australia, Lauren Downs, the launch of the Volvo B5L S-Charge is the solution that many customers have been asking for.

“We certainly have electric buses in our future plans for the Australian market but our priority has been, and will continue to be, providing sustainable transport solutions for all Australians. The Volvo B5L S-Charge delivers that, and most importantly, it delivers it now,” she said.

“There is no need to consider the build of additional charging infrastructure, which can be difficult depending on depot location, grid connection and power supply,” Downs added.

“This solution is not only sustainable, but it is tried and tested, we know it work sand we are able to deploy immediately. The Volvo B5L S-Charge provides us another tool in the “tool kit” as we progress from clean diesel and bio-fuels to self-charging and grid charged electric vehicles – all of which will play a role in the future”.

The company says that the B5L S-Charge runs in electric or hybrid mode and can operate on up to 100 per cent  biofuel. The company’s statement added that It has been proven to run in electric mode up to 50 per cent of the duty cycle time and always runs emission-free at bus stops, in depots and in defined zero emission zones.

Volvo says the batteries are charged via both the energy that is captured through braking regeneration and the small engine. As a result, the Volvo B5L S-Charge can be used on virtually any bus route both in urban areas and in the suburbs.

The upgrade of the B5L also includes improved connectivity via Volvo’s connected service offering, which allows for geo-fencing and Volvo’s Zone Management function, which makes it possible for the operator to program the bus, so it automatically switches to electric within selected areas and has its speed regulated without driver intervention.

It is also possible to define zones for sustained self-charging, to ensure emission-free operation in an upcoming zero-emission zone. This allows the bus to be driven silently, emission-free and energy-efficiently on electricity before arriving at the bus stop, while at a standstill for boarding and exiting, and when leaving the bus stop.

Hot on the heels of  its deal with NSW TAFE to train electric bus technicians Volvo is preparing for the launch of its first all-electric bus chassis, the Volvo BZL,  due later this year.  Volvo’s […]

Australia’s largest order of electric buses on track can proudly claim to be driving real change in the way sustainable public transport is delivered, and it has. Transit can be well justified in its claims […]

Volgren has delivered its milestone 100th Marcopolo Audace with Nowra based Kennedy’s Bus and Coach taking possession of its newest bus last month. First brought to Australia in December 2013, the Audace is imported from […]