Isuzu has taken the industry by surprise announcing that its local Australian subsidiary is developing its own electric truck concept and could possibly build the truck here to answer what it say is strong demand from Australian fleet customers.

The development program is being handled entirely in Australia with Isuzu Australia Limited working with Australian electric truck operation SEA in Dandenong.

Isuzu unveiled two prototype EV models at the Megatrans Logistics expo in Melbourne today and says that market ready trucks could be on Australian roads inside two years. 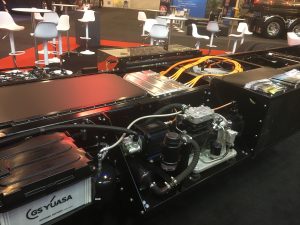 “Australian fleets are telling us they want an electric truck with a range of at least 200 km and that range is a strong motivator for them,” said Simon Humphries.

“Our telematics data has shown us however that the majority of back to base distribution trucks average about 140kms,” he added.

Isuzu’s Australian EV program is focussing on two models, an FSR rated at 14 tonnes GVM and a smaller NQR rated at 8 to 9 tonnes GVM. Both use a direct drive permanent magnet motor with NCM Li-Ion battery packs fitted into the chassis in place of the regular turbo diesel motor. Isuzu is quoting power of between 130kW and 250kW peak output with torque of 1500Nm for the NQR EV and 2500Nm for the FSR version.

Simon Humphries says the technology is advancing rapidly and that the price and efficiency of battery packs is improving all the time. 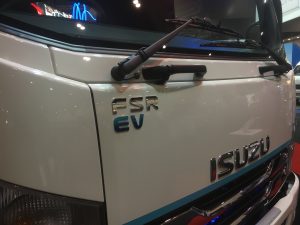 “A lack of infrastructure is the biggest hurdle at the moment but that is changing all the time and unlike our foray into CNG trucks there is clearly will to add charging stations etc.” Humphries said.

“The fact that these can be charged on a standard industrial 3-phase outlet in about six hours means that these trucks can be easily charged at most warehouse or factory installations,” he added.

Isuzu’s national sales manager, Andrew Harbison said that EV is on the crest of a wave and that while roll out and take up is minimal at the moment the technology will be rapidly embraced in coming years.

“This EV program is an investment in our future and an investment in our customers, many of the roadblocks to EV take up have been surmounted and we believe that if all of the fleets that have been talking to us buy EV trucks then initially we could be looking at a market of about 200 units per year,” said Harbison.

In more dealer of the year awards PACCAR Parts  has announced Twin City Truck Centre in Wodonga as its 2018 Dealer of the Year. The award was presented at the company’s Dealer Meeting in Queenstown, New […]

As Truck and Bus has been predicting for some time, Volkswagen’s commercial vehicle arm, Traton, has finally made a firm bid to take over the remaining 83 per cent of US truck maker Navistar, that […]

VOLVO LINKS UP WITH THE PILBARA HEAVY HAULAGE GIRLS

To help address the chronic shortage of heavy vehicle drivers in Australia, Volvo Group has announced it is formally supporting a ground breaking heavy vehicle driving academy, The Pilbara Heavy Haulage Girlsbased in Karatha in […]