Ask anyone in the know in the Australian truck market about the Iveco brand and most will tell you that the revolving door at the front of the building has for some time been sucking corporate leaders and executives out almost as soon as they get comfortable at their desks. Such has been the turnover and attrition rate of senior managers, a factor that does nothing for a company as it battles in a highly competitive market

Retiring exec and now brand ambassador for the company, the long serving Lloyd Reeman has been one of the constants but in the past 20 years he has seen something like 10 different CEOs running the company, not to mention the marketing, admin and finance execs who have passed in and out of the Dandenong HQ. 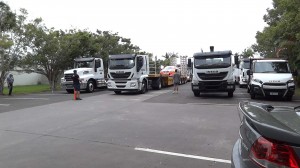 Iveco hosted Australia’s trucking media at the Norwell Performance Driving Centre north of the Gold Coast this week and there is some confidence that the revolving door may have been chocked and that stability may have been installed at the Dandenong truck maker.

Control and responsibility for Iveco these days comes under the Case New Holland Industrial operation or CNHI, to make the unwieldy title more useable. CNHI is also part of the labyrinthine corporate family that is the Fiat Group but control of Iveco has moved away from Fiat to the massive agricultural and industrial equipment maker in the group.

MD of Iveco is now former CNHI exec Michael Jonson, while marketing is under the aegis of a former Kodak exec, Darren Svenson. Unfortunately Michael Jonson was a scratching from the media event due to a family commitment. It will be interesting to sit down and chat with him at some stage in the future to discuss his plans for the future at Iveco

While Iveco had a sales fillip from its updated and popular Daily vans and light truck chassis last year, its overall market performance in 2015 saw it drop 4.4 per cent to register 1395 sales across all segment. That puts it marginally behind Swedish rival Volvo with 1476 registrations. With such a diverse and multi-faceted range Iveco should be selling more, however time will tell whether new cohesiveness and stability at HQ will help it achieve that goal.

While there wasn’t much news at the media event there appears to be a resolve to cement things down and bring some stability to the truck maker with a longer-term view and a broad product range to cover just about all bases.

The  one morsel of news was that Iveco  is embracing some motor racing marketing opportunities both in V8 Supercars where it is already involved with the leading Triple 8 team and in Australian GT Racing.  The Darren Svenson announced it will expand the Triple 8  relationship with extra support including on car signage and trucks for the team’s new one car Vortex racing offshoot with crowd favourite Craig Lowndes at the wheel and with trucks for the team’s established Red Bull Racing  operation that will run cars  for both multiple V8 and Bathurst champ Jamie Whincup and for new recruit, Kiwi Shane Van Gisbergen. As well as Triple 8  Iveco  will also be supporting Tony d’Alberto and Grant Denyer in  their Maranello Motor Sport  Ferrari 458 in the Australian GT Championship and also at this weekend’s  Bathurst 12 Hour with both signage sponsorship and the supply of trucks. 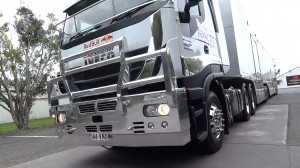 Just about the entire Iveco product line up was on show at the event, which was, piggy backed onto the company’s annual dealer conference.

The line up has a strong skew to the off road range which allows Iveco to cover just about every niche from the light duty Daily 4×4 to the giant 8×8 Astra while the on road offerings ran from from Daily tipper and van to the range topping Stralis ASL hauling the Red Bull Racing B-Double race transporter.

The Norwell facility owned by Morris family and run by past Bathurst 1000 winner Paul Morris gave Iveco the chance to showcase the stability package of the Daily with a testing course on the skid pan and the chance to give it its head on the 2km Norwell test track.

The off roaders were sampled on a simple but surprisingly testing little off road track while the on highway trucks were able to be taken around a simple little 20 km loop from Norwell to Yatala and return. 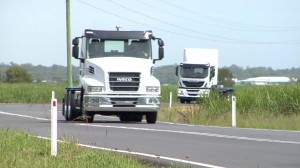 The on highway test hardly gave a true indication of performance, – apart from highlighting the capability of the suspension on the choppy tarmac through the local canefields. The fact that several of the trucks carried no load, and in the case of the recently updated ACCO, not even a body, made it difficult to get a feel for the true ability of the vehicles. It is difficult to get the feel of a working vehicle if its not hauling a workload at the very least. It is a pity because in this writer’s view the Ivecos proved quiet, comfortable and in the brief encounter highly capable.

The Stralis AS-L Series II featured the updated Cursor II 13-litre engine, which first broke cover at last year’s Brisbane Truck Show. Of the on highway test trucks on test, it was probably closest to its fighting weight hauling around 40 tonnes.

The flagship Stralis prime mover can now be had with either 560 or 500hp rated 13 litre engines both offering an impressively flat torque curve boasting 2300Nm over a wide 700rpm range. The test truck had the higher rated 560hp configuration with the 16-speed Eurotronic automated manual.

A fully air-mounted cab is now used along with upgrades to the interior styling and trim in a bid to put it on an equal footing with its European counterparts from Volvo, Scania, DAF and MAN in the under-90 tonne GCM, single trailer / B-Double market.

Also on test was the Stralis 8×4 featuring IVECO’s ‘Clear Back of Cab’ design. The test truck was configured with twin-steer giving higher load carrying capacity over the front and giving operators the ability to fit cranes or to carry additional payload on the tray. Unfortunately the 8×4 carried no load at the media day.

It is capable of carrying a payload of up to 11-tonnes within the gross weight limits with a 14 pallet capacity thanks to the weight distribution over the four axles. It was powered by the 500 hp Cursor 13-litre with the 16-speed Eurotronic automated manual

A Stralis 6×4 prime mover, using a Cursor 10-litre with a 12-speed automated manual, was hauling a flat top semi with a single Holden Racing Team Commodore racecar mock up strapped to the back. Again a very capable feeling truck but it hardly broke a sweat with a 1500kg car as its only real payload. 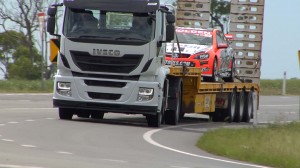 On the off road track the all wheel drive fleet saw Iveco’s heavy-duty off-road toughie the Trakker 6×6 along with its new little brother the Trakker 4×4. This is the biggest 4×4 in Iveco’s burgeoning off road offering, boasting an 18 tonne GVM and power by a 7.8litre 265 hp Cursor with a handy 1500Nm down to around 1100rpm, ideal for inching through tough offroad conditions. It used the standard 16 speed Eurotronic A/MT bus also can be had with an optional Eurotronic 12-Speed automated transmission which would be very handy in tricky off road running and would be our choice.

The all-new 4×4 version of the award-winning Daily was on display but off limits for a drive, with its launch planned around mid-year. In its stead we had the superceded Daily 4×4 with its impressive double low range transfer case and six speed manual transmission which offers 24 speeds overall and an incredible 1:120 final drive ratio, not quite enough to climb a brick wall, but it could tackle a near vertical obstacle built cover a shipping container on the off road course. One could only assume the new Daily 4×4 will be even more impressive when it arrives. 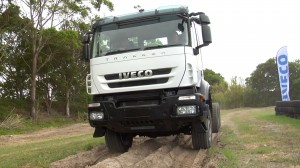 The new Daily 4×4 was on static display but as mentioned was off limits was just a pre-release look but don’t touch preview.

The ASTRA 8×8 was the heavy hitter in the off road line up and with impressive axle articulation and amazing traction from its cantilever suspension, 16-speed Eurotronic A/MT, diff locks and hub reduction this feels like a truck that could go just about anywhere even with a GCM of 70 tonnes. Only its weight would stop it in deep mud one suspects.

On the test track Iveco showed off the ESP and handling capabilities of the Daily van as well as showing off the new factory built three way Daily Tipper. 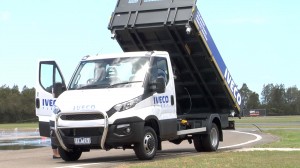 and its ability to be driven on a car licence. Its hand-held cable remote control also gives the operator more safety and versatility.

The Daily van has not only won critical acclaim since its launch in 2015 but as mentioned also delivered a 50 per cent boost with sales of 869 van and light truck configurations registered since its launch mid through last year. That means the Daily accounted for 64 per cent of Iveco’s Australian volume last year making it an important component in the mix.

The impressive ESL safety package of the Daily was given a strong workout with Iveco giving us the challenge of two timed laps on the wet skidpan. With competitive journos trying to outdo each other the van was pushed to the limit and didn’t put a foot wrong, as was the case when we dashed it around the race circuit. 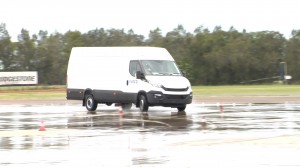 As we said time will tell if the new management stability and cohesiveness at Dandenong will translate into improved sales performance. Certainly with the model mix and the breadth of range there is no reason why Iveco shouldn’t climb the sales charts in 2016 especially with more new product on its way. It seems to have all bases covered but it might need more than that to score more runs.

While other manufacturers are rolling out electric concepts, Iveco has unveiled a liquefied natural gas (LNG) concept at the Hannover Truck Show, the Z Truck. The Iveco Z features all the technology you’d expect from a […]

IVECO SHUTS THE GATE ON DIESEL AT HANOVER

Iveco has announced that its stand at the upcoming IAA Commercial Vehicle Show in Hanover will be 100 per cent diesel free. Iveco says that it will stage the display in collaboration with Shell displaying […]

Iveco has announced a 2017 plate sale on its Eurocargo and Daily ranges as well as the just introduced International ProStar models. The ProStar has hardly had time to get rubber on road and already […]