La Trobe Valley Bus Lines (LVBL) recently partnered with Volgren and Volvo to launch the State’s first Volvo Euro6 route service bus as part of a shared commitment to a clean up the environment.

The family bus business and operator in The Valley for more than 50 years was proud to become the first Victorian bus company to operate and invest in the important technology, it’s claimed. Euro6 is the latest global vehicle emissions standard for improved environmental performance and lowering fuel consumption and noise levels as well.

Launched 30 July, 2015, the Volvo Euro6 chassis under a Volgren Optimus body reduces particular matter emissions by up to 80 per cent and nitrous oxide by up to 60 per cent, it’s claimed.

LVBL owner Rhonda Renwick said the new bus will fit in well with LVBL’s commitment to the environment.

“Our environmental initiatives include a commitment to a modern fleet of buses in good mechanical order.”

The launch was attended by Ms Harriet Shing, Federal Member for Eastern Victoria, as well as representatives of Volgren, Volvo, Public Transport Victoria and LVBL staff.

Ms Shing congratulated LVBL, Volvo and Volgren on their commitment to “keeping local” in bringing the first Euro6 service to Victoria. She said it was great to see Latrobe Valley businesses partnering with leaders in the Victorian manufacturing industry, such as Volgren, to introduce world-leading technology in ways that benefit people in the community.

Latrobe Valley Bus Lines has also put its backing behind a truly worthy cause, the Red Kidney Bus, part of several initiatives by Kidney Health Australia. The company says it’s proud to be involved with such a valuable cause. 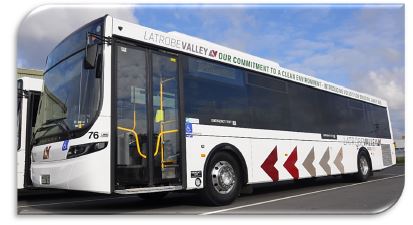 Scania has scored a significant sale of its hybrid-electric buses to South Australia’s Department for Infrastructure and Transport which has ordered 17 of the new Scania hybrid buses, in a total order for 20 Scania […]

PONCHO SET TO SELL IN AUSTRALIA

Three years after its unveiling, Hino has announced the Poncho will be launched in Australia in October. The Poncho is Hino’s seven metre minibus with room to seat 22 with a further 10 standing and […]

VOLGREN WRAPS UP ITS 12-YEAR CONTRACT WITH BRISBANE CITY COUNCIL

Volgren has delivered the final bus of its agreement with Brisbane City Council  which has spanned the last 12 years and  saw 882 of its buses delivered to the Queensland capital. The handover event featured […]