LIKE A RED BULL TO AN IVECO! | Truck & Bus News

The ever growing attraction for truck companies  to embrace V8 Supercars  has continued with Iveco  further cementing its relationship with the Triple Eight Red Bull Racing team.

Having spent the past year using two Iveco Stralis AS-L prime movers to haul their B-Double race car transporters,  the Red Bull Racing drivers visited Iveco’s Melbourne manufacturing facility to see where the trucks were assembled and modified for the Australian market.

The team visit provided Iveco’s 300 plus workforce with the opportunity to meet the drivers and have photographs taken with them. The popular pair also provided an update on the team’s preparations for this weekends Sandown 500. 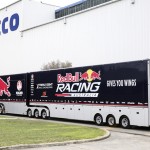 For Lowndes, the visit to Iveco was somewhat of a homecoming, having previously toured the plant early in his V8 Supercar driving career with the late Peter Brock, as part of the Holden Dealer Team. Lowndes commented that the facility had changed markedly since his first visit. “The manufacturing plant has been considerably upgraded and enhanced since the last time I was here almost 20 years ago,” he said. “It’s impressive to see the quality of the products that are being built and assembled here by Iveco – there’s been a lot of investment and the products being produced are world-class.

“With the major local car makers exiting Australia in the next few years, it’s important that this large scale manufacturing knowledge is retained. I think as a nation it’s important we continue to manufacturer here.”

Holding a multi-combination truck licence, Whincup has been known to take to the wheel of the 560 horsepower Stralis B-Double from time to time. “‘Wazza’ our truck driver is very particular about who he lets drive his truck, but occasionally he will let me have a go,” Whincup said. 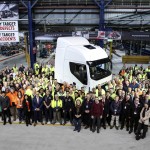 “A few months back I actually sneaked in to our racing headquarters and took the truck from Brisbane to Toowoomba to pick-up one of my old race cars. What had slipped my mind was that to get there I’d have to cross the Toowoomba range. “Luckily I was able to give Wazza a quick call and he gave me a ‘101 lesson’ on how to use the engine brake, in the end the truck handled brilliantly even with a want-to-be novice truckie at the wheel.”

Iveco Marketing Manager, Darren Swenson, said it was exciting for Iveco to be associated with a professional racing outfit such as Red Bull Racing Australia. 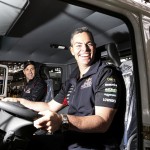 “In so far as Australian V8 Supercar teams go, there’s no doubt that Red Bull Racing Australia is at the pinnacle in terms of its professionalism and its racing achievements over the last few years,” Swenson said.

“And then there’s the human factor – Jamie and Craig are just great guys, and we’re very proud to be associated with them. “We’re also pleased that the two Iveco Stralis AS-L prime movers are performing well for the team and we look forward to continuing our close association with them well into the future.”

Hot on the heels of the announcement that Daimler Trucks had become a separate auton0mous entity sitting alongside the Mercedes Benz car oiperations in Australia, the massive German automaker says it is moving toward implementing […]