SAFETY WITH ABILITY is the message from Mercedes about its new Vito van range. All-new, the VS20 series has very similar styling to the outgoing model and is available in two wheelbases and three lengths and with front- or rear-drive.

There’s also a plethora of safety options too, such as collision avoidance assist, active parking assist, blind spot assist and lane-keeping assist. In fact there’s more ‘assists’ than in a good AFL team! All are clever techs that have been seen and available, variably, in the passenger car marketplace and are now included by Mercedes for its light commercials. Somewhat controversially, front curtain and pelvis airbags are on the options list for the Vito: Yes, stability control and attention devices help a driver keep control, but surely side impact protection is essential when someone else can’t? They’re an extra $350 each side.

Of course, that’s all background to the load-carrying ability of these vans: up to 1285kg for the entry-level front-driver on a low load floor with sliding doors both sides and a lift-up tailgate. Barn rear doors are an option. Interior capacity is 5.8 and 6.9 for short- and long-wheelbase with 3.6 in the five- or six-seat Crew Cab model, which rolls on the shorter 3200mm wheelbase but has a longer rear overhang with under slung spare. The panel vans have a choice of two or three front seats, too, and a partition is an option in all.

T&TT’s first drive was from Sydney’s CBD to – a drumroll, please – Sydney Motorsport Park in a short-wheelbase 114 Panel Van. It’s $41,940(inc GST) with the optional auto ($2875). The seven-speed auto has steering wheel paddles – but who uses those after the salesman has demonstrated them? It’s one engine size up from the entry-level six-speed, shorty-only front-driver 111 (at $37,140) that we reckon will be a smart choice for tradies who are sick of the security risks associated with single- or dual-cab utes.

The intended drive route was either along Sydney’s Parramatta Rd to the M5 Motorway and then to SMP, or over the Harbour Bridge and more freeway travel on Sydney’s M2 and then M7 Motorways… But you know what? After mis-understanding MB’s very first drive-route instruction (in Sydney peak-hour CBD traffic, no less!) I chose to just ‘get lost’ and instead spent my allocated drive-time simply following my nose; much of it cutting my way through Epping, Carlingford and North Parramatta, running the Vito over typical courier and delivery-driver type terrain of suburban back streets, roundabouts and stop signs.

It was ‘terrain’ the Vito rear-drive auto relished… So, Mercedes takes the lead with safety tech and it’s not a bad drive, either. Earlier, I’d taken just seconds to get comfortable, feeling at-home almost immediately behind the chunky, comfy three-spoke steering wheel with adjustment for reach and height. The seat is adjustable for height, too, and the park brake is left-foot operated for engagement, with right hand operation for off: it’s classic Mercedes, but possibly not the most intuitive of systems for newbies. However, there’s no reaching down deep between the seats for the handbrake lever, and it frees the space between the seats for relatively easy walk-through access to the rear, especially as an auto with the gears’ engagement via a wand to the right of the steering column (the manuals’ selector is to the right of the centre stack). A bulkhead is an option.

The off-idle pull was terrific (however, the vans were empty) and the steering surprisingly feelsome. Electric assist steering, such as that fitted to the Vito, has a reputation for synthetic/dead feel but MB’s placement of the electric assist mechanism at the rack end of the system, rather than the driver’s end (said very simply) allows more communication to the steering wheel. Sure, that’s not such a big issue in a van compared to a sports car, but anything that makes a day in the office more bearable is a good thing. Speaking of office, there’s not much in the way of hidey-holes around the dash, but maybe that’s not an issue in this era of on-line, back-to-base everything. 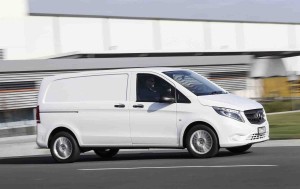 Overall, the Vito scores a thumbs-up for comfort, but a back-hander for the speedo; the needle obscures the actual speed you’re doing, making at-a-glance, subliminal recognition difficult – but hey, MB is not the only one guilty of this.

One thing that stood out from my rat-run driving time in the open-backed, un-lined, plain and simple big white box was the lack of noise. It’s quiet. The only intrusion comes from coarse-chip bitumen (and of course pot-holed gravel) but typical empty-van booming is just about non-existent. A closer look at the body construction reveals good attention to sound-proofing; MB’s 96 percent automation in vehicle assembly (the Vito is built in Spain) will also, no doubt, add to the structural integrity of the shell and therefore its impressively low noise levels. Equipment installers will have to match the Benz’s relative hush with a squeak and rattle-free fit-out. The shell is fully galvanised.

And then we got to racetrack. Two thumbs up for MB for having the guts to let us drive vans at a race track, but we weren’t really there to cut quick lap times. The intention was to highlight the safety of the new Vito and with Mercedes driver trainers calling the shots, we were encourages to give the brakes the bejeezus. Later, we were let loose on a SMS’s driver training skidpan with Vitos equipped with special, hard, low-grip caps on the rear wheels to allow easy – and relatively low-speed – demonstration of the ESP9 stability control’s ability to rein-in a vehicle bordering on the edge of 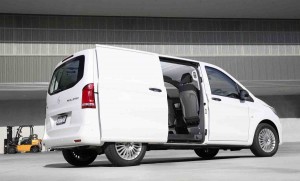 Later, I snuck off onto a gravel access road within Sydney Motorsport Park and had a play; this road perfectly replicated a typical rural road, complete with the potholes and off-camber corners. Running the plain, manual front-driver and the larger-engined rear-drive auto models back-to-back at 80km/h confirmed the good ride and handling characteristics of the new Vito’s strut front/semi-trailing arm rear independent suspension (even when unladen) and the effectiveness of its stability control and braking systems in real-world conditions

Daimler’s managing director Daniel Whitehead has announced it is in discussion with several parties in New Zealand to take over the Freightliner and Mercedes-Benz Truck and Bus distribution. “We are talking to a number of […]