Volkswagen has launched the latest version of its light van range with the latest model Caddy and Transporter previewed to the Australian media this week.

The big news with the latest Caddy are the price drops with the workhorse model starting from $28,190 for the manual TSI220 with a more powerful turbo-petrol TSI engine, but no diesel just yet, that will come when some of the company’s emission challenges are sorted, later in 2016 it says. 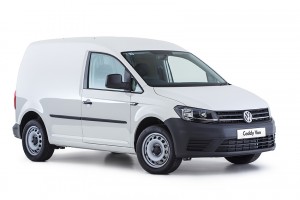 As well as the fourth-generation Caddy VW also debuted the new and much anticipated T6 Transporter, the sixth generation of the iconic   Volksy van/people mover since its inception in 1950. 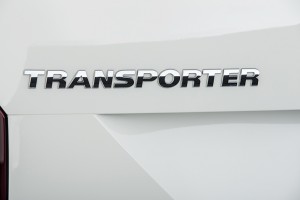 The new T6 models are impressive   using a suspension with front struts and rear semi-trailing arms servo-assisted rack-and-pinion steering with just 3.3 turns lock to lock and an impressive and compact 11.8 metre turning circle for the front drive models

VW is offering three versions of its impressive two-litre (1968cc) turbo-diesel engine, the TDI 340 version uses a single variable-geometry-turbo producing 103kW and 340Nm while the middle variant, the TDI 400 single turbo to produce 132kW and 400Nm. The new top shelf TDI 450 engine features a sequential biturbo to conjure 150kW at 4000rpm and that whopping 450Nm of torque from 1400 to 2400rpm. This hugely under stressed and effortless engine apparently returns 6.5 to 6.8L/100km, but we will confirm this once we have tested it.

T6 comes equipped with six-speed manual or seven-speed DSG dual-clutch automatics while the 4Motion all-wheel-drive system is available for the Transporter TDI400 and Highline TDI450 versions.

The BlueMotion system is employed to achieve the fuel-consumption figures, while SCR (selective catalytic reduction) is used to reduce NOx emissions, a factor VW is probably wishing it had pursued for its other smaller diesel models given the current fracas

The standard wheelbase T6 Van delivers 5.8 cubic metres load capacity with a 1.236 tonnes payload and a maximum load height of 1290mm through the standard tailgate with a maximum load width of 1700mm or a pallet-friendly 1244mm between the wheel-arches. 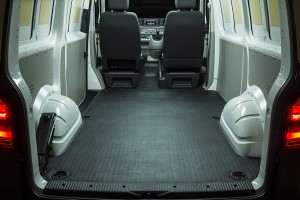 Load capacity goes up to 6.7 cubic metres in the medium roof version

A reversing camera is an option on the Van and Crewvan models, while a Composition Colour audio unit with a 5.0-inch screen and Bluetooth phone and audio connectivity is standard in the Transporter.

The T6 range opens with the $36,990 Transporter TDI340 Van with a six-speed manual and a single kerbside sliding door.

Crewvan variants priced from $43,490 add three removable rear seats side-by-side and a roadside second sliding door, which is also available in a dual-loader option for the van while there are also three-seater single-cab from $44,690 and a six-seater dual-cab utility version from $45,290.

We’ll have more in a separate story about the more passenger/mini bus variants of the T6 in coming days.

Meanwhile the fourth gen Caddy offers swag of safety inclusions (despite its lower pricing compared with the outgoing model), which aren’t always expected in small vans including side/head airbags and side curtain airbags, in people-mover versions. 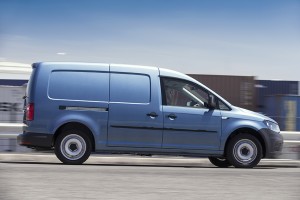 It also boasts post-accident-protection Multi-Collision Braking system and a Fatigue Detection system that works with a variety of sensors to monitor the driver, both as standard across the range.

A reversing camera is available as an option in the workhorse variants, but is standard in the people-mover models.

The new 5.0-inch touch-screen Composition Colour multi-media unit is offered on the Trendline and van models while and a 6.3-inch Composition Media unit that features neat finger-proximity sensors for inputs and App connectivity for both Apple Car Play and Android Auto is offered on the Comfortline variants.

The new Caddy certainly has a sharper look although it retains its familiar shape.

The 1.4-litre petrol turbo four-cylinder produces just 92kW at 4800rpm along with a pretty fair 220Nm from 1500 to 3500rpm and is matched to either a six-speed manual or a seven-speed dual-clutch automatic gearbox.

Caddy continues with a leaf-sprung solid rear axle along with struts up front with anti-roll bars front and rear coupled with electromechanical steering.

There are short and long-wheelbase variants with the Maxi versions featuring a 2249mm wheelbase along with an additional cubic-metre of cargo space when compared to the 1779mm SWB version.

The van’s cargo area features a pair of asymmetric barn doors, which open 90 degrees on latches, or 180 degrees when disengaged or you can option a lift up tailgate.

It comes standard with a single kerb-side 700mm opening sliding door while you can option a second drivers side sliding door.

Caddy Maxi Crewvan is a very practical option sitting between the van and people-mover versions offering as they do sliding rear side windows and easily changeable rear seating which seats up to three across as well as boasting a maximum capacity of 3590 litres with the seats folded forward, growing to 4130 litres with the seats removed entirely.

VW is offering a raft of options packages that are grouped together and best explored on the Volkswagen website.

Truckandbus.net.au will have a full rundown on both Caddy and T6 Transporter in coming weeks with full road tests and details in upcoming issues of Transport & Trucking as well as Coach & Bus.

Scania has announced it will launch its own finance arm toward the end of the first quarter in 2016.  Scania Financial Services (SFS) has had a great deal of success in European markets and […]

Fiat Professional has collected the UK Motor Transport Fleet Van of the Year award with its large Ducato offering. The Motor Transport panel of expert judges also saluted the Ducato’s excellent chassis which is becoming […]

TRATON FLOAT SET TO GO AHEAD BEFORE THE END OF JUNE

Volkswagen’s plan to list its truck division later this month could totally remap the global truck market and change the face of VW as an automotive group while also luring rivals into doing something similar. […]