Nikola founder Trevor Milton arrived at the grandly named Nikola World event in Scottsdale, Arizona aboard a transport mode from a bygone era sitting atop a wagon pulled by the Budweiser Clydesdales.

The contrast was stark but  given the fact that Anheuser-Busch the parent company of Budweiser has made a major commitment to buy Nikola trucks it was a perfect bookend to the company’s transport provisions  over more than a century.

Anheuser-Busch has placed orders for more Nikola Class 8 hydrogen-electric semis than any other company and more than 2,000 people witnessed the arrival of Milton to usher in the new era of transport for the Budweiser brand at Nikola World.

Nikola has come a long way since being founded in a basement in 2014 with the vision to sell electric heavy duty trucks. It has grown to include plans for off road sports pickups as well as military vehicles and of course its  European oriented heavy duty electric truck, the Tre.

There are now more than 130 people working for Nikola and that number is about to ramp up rapidly with the headcount to reach 300 by the end of this with the   flagship Nikola One truck set to start regular production in 2022.

Nikola has already invested more than $US1 billion into its  Nikola drivertrain and investors there have been no shortage of investors lining up to be involved and to provide funding.

You can’t accuse Nikola of moving too slow. Before it even launches its truck in North America in 2022 it has also been working to develop the hydrogen fueling infrastructure that will be rolled out at the same time it ramps up truck production.

Nikola’s first hydrogen fueling site is operational in Arizona with ten more eight-ton per day sites set to open up in the next few years while it is predicting that there will be another 700 sites expected to be operational across the U.S.A and Canada by the time Nikola trucks start rolling on North American highways.

Unlike Tesla, Nikola is the only truck maker which has committed the hydrogen-electric concept with the hydrogen fuel cell providing a range of up to 1100 km but  the Ariziona based company has also committed to a pure electric version for short distance urban and regional work.

Nikola boss Milton reckons that about 80 per cent of its sales will be the hydrogen-electric fuel cell truck.

Nikola says that it will produce hydrogen from renewable solar and wind power sources and is working on a different finance model for its trucks offering a lease which will include the truck, seven years worth of fuel and tyres, along with all maintenance. At Nikola World Milton announced that all maintenance for Nikola would be provided by major truck rental organisation Ryder.  At the moment Nikola’s CFO Kim Brady says that the expected bundled cost will be approximately the equivalent of 86 cents Australian per kilometre (.95 cents US per mile)

“The really great thing is that your management team will be able to say, I can predict my costs for the next seven years,” said Brady.

Nikola will also sell trucks outright, if that’s the customer’s preference as well as other combinations of finance models.

The company believes it will have the most cost-effective, on-site hydrogen fuel production capabilities available with the plan being that every Nikola fuel station will produce its hydrogen on-site negating the need for transportation, making it even more cost effective and environmentally-friendly. 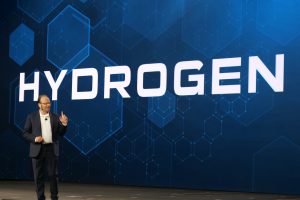 So far Nikola has taken orders for more than 14,000 trucks which will take more than three years to build and for now at least Nikola has stopped taking orders to ensure the backlog doesn’t grow any more. Anheuser-Busch has ordered 800 Nikolas trucks.

“These will play a key role in our plans to convert our entire longhaul dedicated fleet to renewable-powered trucks by 2025,” said Anheuser-Busch vice-president of sustainability, Ingrid De Ryck.

Nikola is claiming that its hydrogen electric trucks will boast 1000 horsepower per drive axle and 2,000 lb.-ft. of torque  and that they will take just 15 minutes to fully fuel an 80-kg hydrogen tank.

That 80-kg hydrogen tank will give the truck an 1100km range with a total cost of operation that Nikola will rival or beat the cost of owning and running a diesel truck.

Trevor Milton said the truck was designed from a clean sheet of paper, which  he says is a major advantage.

“It all came down to styling, aerodynamics, and efficiency, which was the central focus for this truck when we developed it from the ground up,” said Milton.

“ The question we posed ourselves was how do we build a truck unlike anything that’s ever been built?” Milton said.

“However it’s one thing to build a truck that looks different, but it must also perform as well or better than diesel trucks do today,” Milton added.

“We had to have something that’s high-performance as well and on top of that, if you don’t have a low enough total cost of ownership, nobody is going to buy it. You almost have to beat diesel in every category,” Milton said.

The 80kg hydrogen tank can store more than 3,000 kWh of energy, while adding only 72 kg. to the GVM. It would take more than 13 tonnes worth of batteries to equal that in a pure electric truck,” said Milton.

Milton said a hydrogen-electric truck weighs about 2.2 tonnes less than a fully-electric vehicle.

Bosch Commercial Vehicles, has worked closely with Nikola on integrating technologies including, like Daimler is adopting, cameras that will replace the truck’s traditional mirrors.

“We like this for aerodynamic benefits. We also like it for enhanced safety,” he said, noting the cameras can eliminate sunlight reflection and show the driver exactly what they need to see at any given time.

For example, the driver will get a different view when the truck is in reverse than when it’s headed down the highway. And cameras can alert the driver to a car that’s coming up on its rear at high speed – something they otherwise may not see until too late.

“Current mirrors have no logic behind them,” said Milton, noting the addition of color can help drivers more quickly process what they’re seeing.

The entire interior is digital, with a 21-inch 4K display infotainment system and a 13-inch instrument cluster.

Voice-activated commands allow the driver to adjust settings without taking his or her hands off the wheel allowing the driver to instruct the truck to adjust the climate control on either side of the cab or to turn on seat warmers.

Nikola will also eliminate keys altogether, instead drivers will be able to control the door locks using a personalised app on their phone and when they approach the truck, it will recognise them, automatically deploying the steps as well as setting the interior temperature.

The obvious question is what happens if the driver loses the phone?  Well if that happens they will be able to override the security systems using a series of codes.

Milton says that the keyless entry technology which Bosch is pioneering will make it impossible for trucks to be stolen.

Steve Jennes who designed the Nikola truck said he drew inspiration from high-speed bullet trains in Europe and Asia in penning the Nikola.

The wheelbase measures 5334mm, but designers hope to get that down to 4826mm by the time the truck enters series production in 2022.

Nikola says its Nikola Two day cab truck will boast  tremendous space behind the driver thanks to the fact that  the driver’s seat has been pushed forward by 1.2metres which will enable Nikola to install an office environment for the driver to complete paperwork or rest. Nikola says its weight will be no more than a current large medium duty rigid day cab truck.

The interior of the Nikola will feature high-end leather and suede and Milton says the fit and finish is what you’d expect from a high-end automobile.

He added the luxurious design could be a way of attracting drivers including women into the industry, which is struggling with a driver shortage.

Designer Jennes challenged his staff to find the narrowest, brightest headlamps in the world to help with the overall aero package and look and effieciency of the truck.

Nikola says it will build more prototypes and  have them engaged in field testing in the near future.

The Arizona station in use by Nikola today can store just one ton, but is already one of the largest gaseous hydrogen storage facilities in the world. Solar panels will be mounted on the dispensers and the facility roofs, to produce fully renewable hydrogen. Nikola has partnered with US company Nel, which supplies the electrolysis equipment needed to split the water from hydrogen to create the fuel in the self contained and solar powered filling stations Nikola will roll out.

Most stations, which will be located near truck depots, will have a capacity of 7.2 tonnes per day and the fuel will have a retail price of about retail price will be about $AUD 9 per kg  which is about half of what hydrogen costs around at the moment.

Nikola’s first stand alone station will be built soon at a California location close to where attest fleet will operate.

The Nikola plan to not only sell zero-emission trucks but also to supply the hydrogen fuel is critical to Nikola’s rapid rise out of that Utah basement to its $100 million headquarters and research center in Arizona with its fuel cell development lab and billion dollar manufacturing plant.

Much of the funds the company hopes to raise in the latest round of investment it is seeking will go to developing the hydrogen stations and acquiring sites.

To date, Nikola has raised about $AUD420million and the company says it is debt free even after constructing its impressive new headquarters and purchasing the 133 hectare parcel of land for its for which it paid $AUD33.3 million.

If every one of its 14000 orders is fulfilled that represents revenue of around $18.2 billion, not to mention the revenue from controlling the hydrogen production and supply. Like Apple Nikola is looking to control not just the hardware but the software and content as well.

In addition to its trucks, which will constitute the bulk of Nikola’s business the company used Nikola World,to show off several other products including the NZT  battery-electric all-terrain vehicle featuring a fully enclosed cab and designed for near silent, emissions-free operation, the  “Reckless,” a militarised version of the NZT which can be operated by remote control, runs in silent electric mode, has no heat signature for enemy sensors to spot and carries an electric drone for aerial reconnaissance and the

the Nikola WAV – or Water Adventure Vehicle – a battery-powered personal watercraft with aggressive styling that will be put into production if there is sufficient public interest following its debut at the Nikola World event.

UD has announced it has launched a new variant of its heavy duty Quon making a new 8-litre engine offering available ahead of the 2019 Brisbane Truck Show. The 8-litre Quon will come in two […]

Hino is set to give an all new modular electric vehicle platform its world debut at the Tokyo Motor Show later this week  which the comkpany says will give an exciting glimpse into the future. […]

ELECTRIC TRUCKS – MAYBE THE ANSWER IS ABOVE US

Electrical and electronics giant Siemens is trialling a way of powering electric trucks without the need to recharge at regular intervals Near the port of Long Beach, south of Los Angeles, a feeder road is […]