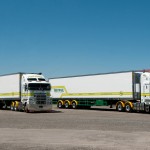 Maxi-CUBE, has announced that it will be displaying its Performance Based Standards (PBS) capabilities at the Brisbane Truck Show in May. The company delivered the first ever PBS van into Queensland recently and says it intends to build on the momentum by showcasing it at this year’s biggest industry event. PBS allows truck and trailer combinations to be designed to safely carry higher than normal payloads and to improve road transport efficiency. Although the majority of approvals since the scheme was introduced have been for truck and tipper dog combos, other segments including refrigerated transport are beginning to catch on. Maxi-CUBE general manager, Kevin Manfield, says that the company is beginning to see a notable increase in interest in PBS trailers. “While our delivery last year to Fruithaul was the first ever PBS van sold into Queensland, we have sold 60 completed units around the country stemming back a number of years,” he said. “That number is increasing rapidly, as more trailers hit the road and operators learn the benefits they can gain.” Those benefits include extra pallet spaces up from 22 pallets, in a standard van to around 26 or 28 pallets under PBS. “Stacking to the roof means a significantly larger load per trip without the extra expense of a B-Double,” said Kevin. Maxi-CUBE will display another PBS trailer for Fruithaul, the third for the Sunshine Coast-based carrier and similar to the first two, a 26 pallet PBS refrigerated van with a payload of 23 tonnes. Kevin Manfield said that while the trailer is impressive, he welcomes visitors to the show to visit the Maxi-CUBE the stand to test the company’s PBS knowledge. “The real key to PBS is a thorough understanding of the scheme,” he claims. “Maxi-CUBE parent company MaxiTRANS, has developed more than 72 approved PBS designs – which we believe is the most of any manufacturer and so there are hundreds of MaxiTRANS PBS combinations on Australian roads, giving us the experience in the field to solve just about any customer challenge.” “Our team will be on-hand to answer any questions that the public may have about PBS – how it works, the safety aspect and most importantly, how it can help improve profitability.” Maxi-CUBE can be found in the main exhibition hall on stand number 32 at the Brisbane Truck Show. The show runs from 14 – 17 May 2015 at the Brisbane Convention and Exhibition Centre.

Hino’s new American headquarters in Novi, Michigan are officially under construction following a ground-breaking ceremony last week. The new facility is expected to be finished by the end of next year and will amalgamate the […]

PACCAR CELEBRATES A DECADE OF MX ENGINE PRODUCTION IN THE USA

For many years US truck maker Paccar  offered a smorgasbord of engine options and still does in many ways, but the reality is that the Seattle based truck giant has seen an increasing switch to […]