One of the quiet achievers of road transport Jim Pearson achieved  a significant milestone recently with the delivery of the 200th Freightliner for his Port Macquarie based  Jim Pearson Transport. “Freightliner continues to be my provider of choice because of their consistent performance,” said Jim Pearson. “Our decision to buy from Freightliner twelve years ago was driven by the need to work with a manufacturer that was as committed to driver comfort and tare weight as well as the availability of commonly used componentry and the support I receive from my local dealer,” 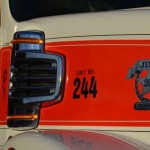 said Jim. Jim started in the trucking industry in 1978, took over management in 1999 from his father and has owned the company since 2007. Within that time it took Jim Pearson Transport twelve years of steady growth and support from local suppliers to reach the delivery of his 200th truck. “When the order for the 200th truck came in, we knew it was important to come to Port Macquarie and say thank you in person,” said Stephen Downes, general manager for Freightliner Trucks Australia. “Purchasing 200 trucks, let alone 200 Freightliners in twelve years from the one dealership is a significant achievement for a regional company like Jim Pearson Transport. It demonstrates both the exceptional quality of the Freightliner product and Mavin Truck Centres’ commitment to providing great product support.” Jim purchased his first Freightliner from Mavin’s in South Kempsey in February 2003, his 100th was delivered  in February 2013 and his 200th in June 2015. All of  Jim Pearson’s Freightliners are powered by Detroit Diesel Engines. “Reaching this goal recognizes our unwavering focus on exceeding our customers’ expectations when they purchase Freightliner vehicles” said dealer principal of Mavin Truck Centre, Dean Mavin. “It also highlights Jim’s loyalty and commitment to his local community. A lot of local suppliers have grown as a result of the support they receive from Jim Pearson Transport.”

STATE OF OREGON WINS FOR DAIMLER

Daimler Trucks North America has announced this week that  it will begin building electric powered Freightliner trucks at its Portland Oregon facility with an expected start to production in 2021. Daimler had already been developing […]

Truck and Bus News understands an announcement will be made in the next few hours regarding Iveco taking on the distribution of International trucks. The International brand is expected to be reintroduced to Australia in […]