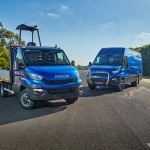 The heat in the large van and small cab chassis market has just been turned up another notch or two with the launch and arrival of the new Iveco Daily range. T&TT had the chance to sample the new models at the launch at Anglesea and came away reasonably impressed with the new Iveco goods carrier.

More than three quarters of the Iveco’s body components are new in a range that includes a range of body and chassis configurations and engine/transmission combinations.

It is available in cab/chassis with single-cab and dual-cab configurations and with either a 93kW/320Nm 2.3-litre turbo-diesel or two different version of a three-litre four cylinder vans, with either single or twin turbo variants.

The cab-chassis version will be available in a choice of GVMs from 3.8-tonne to 7-tonne with wheelbases from 3520mm to 4750mm and the ability to fit bodies of up to 6190mm.

There is also a Daily 50C17 which can be specified with a 4495 GVM and driven on a car-licence or in a l;arger 5200kg GVM variant. The biggest of the vans only comes with the single turbo three-litre and is available with either 12, 16, 18 and 19.6 cubic metre load capacity and payloads up to 2062kg.

While the vans are important Iveco appears to be really pushing the cab chassis versions as a an alternative to cab over light duty trucks for operators particularly the dominant Japanese offerings from Isuzu, Hino and Fuso as well as the Chinese offerings trickling into the market.

Christian Andel who is Iveco Australia Product Manager in charge of the new Daily reckons it serves as a worthy alternative to a cab-over light truck.

“There is a misconception in the market that if you have a demanding light-duty application requiring a vehicle with a reasonably large payload, that your standard-fare cab-over is the only option,” he said.

“The new Daily provides all the best features of a truck, namely a strong ladder chassis and the associated payload benefits, with driving characteristics and safety features more in keeping with a van or passenger car.”

Low-friction piston rings and low-viscosity lubricants has enabled fuel economy savings of around 4.1 per cent over the previous models according to Iveco despite the increased power outputs.

Standard transmission option is a six-speed double-overdrive manual while the ZF ‘Hi-Matic’ eight-speed automatic is optional across the range. Iveco claims the new ZF is the most sophisticated auto available in the van market with the best and widest ratio spread on the market. You can also order a choice of eight different rear axle ratios and a rear diff lock if desired

A choice of eight rear axle ratios is also available, as is the option of a rear differential lock.

The vans feature a single sliding side door and rear barn doors opening up to 270 degrees while the load bay is now 55mm lower than the previous generation.

While the 45C17 and 50C17 single-cabs only get the single-turbo 3.0-litre engine, the remainder of the cab/chassis range gets the added choice of the 3.0-litre twin-turbo.

Serving its argument against light duty cab over trucks the Daily cab chassis boasts a C-shaped solid steel frame features high-strength cross members and a flat upper surface to make life simple for body builders. In a similar way its standard CAN-BUS connections allow electrics to be easily connected and integrated into the Vans or cab chassis models.

Suspension is handled by either Iveco’s new ‘QUAD-LEAF’ independent front suspension or what they call ‘QUAD-TOR’ torsion beam suspension, which is standard on the 50C models. At the rear there are parabolic springs with an anti-roll bar while air suspension is available as an option at the rear also offering a further reduction of the Daily’s load height

There is a full suite of electronic safety features with stability control/traction control, trailer sway and rollover mitigation and antilock brakes with electronic brake force distribution on the four wheel disc system. SRS airbags for both driver and front passenger along with side curtain airbags adds further occupant protection.

Hill start assist and fog lamps with a cornering function come standard on all models.

A full three-year/200,000km factory warranty with roadside assistance is offered and Iveco has bumped engine oil service intervals out to 40,000km and is now offering a range of fixed-cost service and maintenance programs.

All in all the Iveco offers a compelling argument both with cab chassis application and in the Van realm. T&TT will have a full report in coming issues

Mercedes-Benz has entered the highly competitive ute market, unveiling its much anticipated luxury X-Class in South Africa overnight. Europe will be the first to get the new model from November with Australia and South Africa […]

Truck and Bus News understands an announcement will be made in the next few hours regarding Iveco taking on the distribution of International trucks. The International brand is expected to be reintroduced to Australia in […]