With the Covid crisis putting the dampener on so many things in our world at the moment, including new truck launches, Mercedes-Benz has had to gently introduce the latest incarnation of  its Actros with just a press release, rather than a full blown drive program.

Most significant new feature, albeit an option on the updated Actros, is the ‘revolutionary’ mirror cam which is both a fuel saving device and a huge safety improvement, but more of that later.

The new Actros is really an update of the next gen truck launched here in late 2016 after an exhaustive local testing and development program that meant a long lead time between when it debuted in Europe and when it arrived here. It took Daimler almost four years to land that Actros here, but this updated model arrives here about 18 months after it was launched in Europe at the Hanover Truck Show in late 2018.

Daimler rightfully claims the new Actros is the first road-registered vehicle of any kind or size in Australia to be equipped with MirrorCam.

“We are proud to lead the pack and offer our customers another innovation that is not available on any other truck,” said Daimler Truck and Bus Australia Pacific president and CEO, Daniel Whitehead.

“The remarkable suite of new technology in the new Actros means the best cab-over truck available in Australia is now even better,” he said.

The optional MirrorCam system, which captures vision from cameras on aerodynamic wings and displays it on screens mounted on the A-pillars in the cabin, is not the only new feature to be introduced with the new Actros. 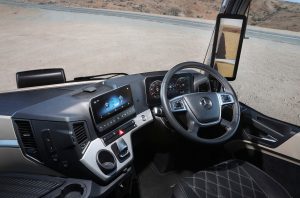 Daimler says the truck is now available for sale across its dealer network, and that  it also comes with Predictive Powertrain Control, uses topographic map data to help the truck anticipate terrain and select the optimum shift pattern and engine response for maximum fuel economy. Truck and Bus News has sampled the  Predictive Powertrain Control and can attest that it works superbly well and will be a hjuge boon for operators in terms of fuel economy and efficiency as well as making life easier for drivers.

Another new feature for the Actros is the multimedia cockpit consisting of two large customisable tablet screens that present information in crisp detail, giving the driver more control and information in a clear and stylish way.

The new Actros also introduces the fifth-generation of the Mercedes-Benz Active Brake Assist system, a radar/camera system which can now automatically perform full emergency braking for vehicles and pedestrians. Mercedes-Benz has included the ABA system as standard specification in Australia for 10 years, and the tradition continues with the new truck. 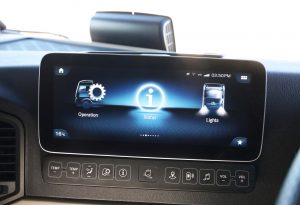 Mercedes-Benz is introducing the new Actros after an extensive local validation program with customer fleets, which yielded positive results and orders for the model.

“We’re excited about bringing our Australian customers the world’s best heavy truck technology and give them an edge by driving down costs and helping increase their profitability,”

“The existing Actros has been great on fuel, but the new one is even better. That’s certainly the message we’ve been receiving from our validation fleet participants.”

The current Actros became the first truck range made available with Euro6 rated engines for all applications and output levels when it arrived in late 2016 and that remains the case for the new Actros.

The new Actros will also be made available with the new SoloStar restful cabin concept, which has been well received since it was introduced last year.

SoloStar represents a new way for the driver to rest in the cab. By moving to a fold-down bed instead of a permanent bed, there is ample space for a driver to spread out during rest breaks or before bed using the café style lounge seat which is positioned at the back of the cab on the passenger side.

The idea is to create more useable space for the driver during the day.

When it is time to sleep, the driver seat is pushed forward and the passenger seat back folded forward to allow for the drop down bed, which features a generous 850mm-wide mattress.

Other changes for the new Actros include new LED daytime running lights within the headlight cluster, the addition of keyless start and a new electronic parking brake, which automatically engages when the engine is switched off.

Mercedes-Benz says it will offer customers an extra incentive to buy the new Actros with a complimentary Best Basic service plan that applies for 500,000km or five years, whichever comes first.

“We believe the improvements introduced with the new truck will generate even greater savings and our free Best Basic servicing offer further consolidates the Actros as the choice for smart transport business operators in Australia,” he concluded.

The new Actros also features the same engine family that was introduced in 2016 which starts with the 8-litre OM 936, with one or two turbochargers depending on the model (using asymmetrical turbo technology) and high pressure fuel injection. This engine is available with 300hp to 350hp depending on the application.

It then movers up to the OM 470 11-litre, which uses a single asymmetrical turbocharger and X-Pulse variable high pressure injection. This engine uses a higher compression ratio and delivers higher torque at lower engine revs. This unit ranges from 400hp to 460hp 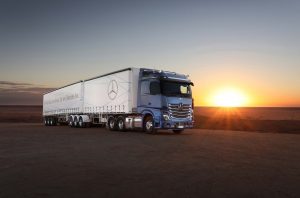 The new Actros continues with the PowerShift 3 Automated Manual Transmission units that were introduced locally in 2016, these include 8, 12 and 16-speed options.

The revolutionary MirrorCam system brings advantages in both safety and fuel economy.

Removing the traditional side mirrors and replacing them with small wings featuring integrated cameras brings a substantial aerodynamic advantage and help save fuel.

There is also a dramatic improvement in visibility. This comes, firstly, from the removal of the traditional mirror and its housing from the driver’s view. This improvement is especially evident at intersections.

The footage from the cameras is shown on 15-inch screens that are mounted in the cabin on the inside surface of the A-pillars. With the screens so close to the position of traditional mirrors, it does not take drivers long to adapt.

The camera is also able to deliver improved rear vision at night and also in the rain.

The MirrorCam wings do not protrude out as far as the traditional mirrors and are higher up on the cab, making them less prone to impact. They can also flex in order to limit damage. In the event they are damaged, the cost to replace MirrorCam is no more than replacing a traditional side mirror. 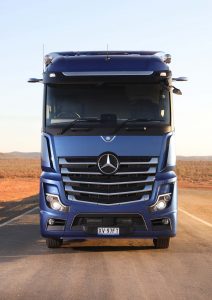 Predictive Powertrain Control or PPC improves the way the engines and the fully automated transmissions are controlled in order to save fuel, by adding anticipation technology to the fuel saving mix.

PPC uses topographical information, including pre-mapped three-dimensional GPS data, to enable the truck to make the best, and most economical, choice of throttle application and gear selection.

On steep hills, ahead of a hilltop, coasting down a hill, in dips or on the flat, PPC recognises impending driving situations in good time and takes anticipatory action. This could mean holding on to a gear, rather than changing up, just before the crest of the hill, or briefly selecting neutral to save fuel in the appropriate conditions.

The system already contains data for Australia’s A and B roads and many more. Additionally, the system learns the routes the truck travels on. PPC can be used in conjunction with cruise control at speeds between 25km/h and 100km/h.

The new Actros also sees the introduction of the latest generation of standard safety technology with Active Brake Assist 5. This system uses a radar and camera that work together to try and prevent avoidable collisions. The news with ABA 5 is that it can now bring the truck to a complete halt when it detects moving pedestrians. It can also stop completely for moving or stationary vehicles when the driver may be distracted, something that is proven to save lives and reduce road trauma. Given the title Autonomous Emergency Braking by safety authorities, this technology is the easiest way to avoid or reduce the impact of collisions including heavy vehicles.

The new truck also comes with Lane Keeping Assist, which alerts the driver if the truck drifts out the lane without the indicator on, Attention Assist which alerts the driver who is beginning to drive in a fatigue-affected manner. A very popular part of the safety technology suite is Proximity Control Assist; an adaptive cruise control function that can modulate the speed of the truck in heavy traffic, even when the traffic grinds to a halt.

Mercedes-Benz says  it will continue to offer its locally-developed telematics service for the new Actros.

This system enables the owner to view information such as vehicle location, driver behaviour, engine status, service alerts and accident alerts in real time. It can be set-up with ‘geo fencing’ to set ‘go and no-go’ zones or to send an alert when the truck has reached a certain distance from its location (such as a depot). In addition to detailed automated reporting, the system is also able to retain three months of data when not in GSM coverage and provide instant alerts via email or SMS collisions or if the vehicle is moved without ignition.

Mercedes-Benz is also offering complimentary training to enable drivers to best realise the lowest cost of ownership, by achieving optimum performance and maximum safety. The TruckTraining program has proven popular among customers of the existing Actros.

The company is launching the new Actros with a complimentary Best Basic service plan that applies for five years or 500,000km, whichever comes first. You can find all the details, including exclusions, at the Mercedes-Benz Trucks website. While this offer is available, customers have the option of upgrading to the Complete Service Plan at a reduced rate.

Service plans, which were introduced in Australia by Mercedes-Benz Trucks back in 1979, give customers the assurance that their vehicles are serviced by factory-trained technicians using genuine parts and lubricants in order to remain in top condition.

Mercedes-Benz Financial has announced it is offering customers a range of financial truck ownership solutions including a popular program called Agility Guaranteed Buy-Back. It guarantees the future value of the truck based on the selected term and kilometer allowance and means that when the agreement comes to end the customer has the option to trade-in, retain or return the truck to Mercedes-Benz Finance at the guaranteed future value amount.

Logistics company Glen Cameron Group has added a milestone 1,000th truck to its fleet. The group was founded in 1975 with a single 8-tonne tray truck and has grown to a national transport company with […]

Light-duty truck and van sales continue to surge while heavy-duty doldrums drag on… Australian truck sales in 2015 up 4.5 per cent in 2015 according to the end of year T-Mark data summary issued by […]

In another major unveiling at the Hannover Truck Show Mercedes-Benz has given its electric Urban eTruck a world premiere, following on from the recent preview of the prototype version.   The 26-tonne, tri-axle rigid […]