Isuzu unveiled a futuristic take on delivery trucks of the future by showing the FD-SI Future delivery concept on its stand at the Tokyo Motor Show yesterday. Some say it looked like a toaster on wheels, others said it was like a badly built Lego model either way it was the most out there truck design at the Tokyo Show

In classic Japanese corporate speak Isuzu says it drew on ‘Group Intelligence’ found in insect’s activities in coming up with the FD-SI concept, saying it reviewed delivery networks from a new perspective to ‘express how exciting the future delivery could be’.
It says it applied “group intelligence” to the collection and delivery method.
The exterior of the FD-SI is a honeycomb-like design and the cargo space is also structured like a honeycomb with the company saying it is a good compromise between strength and space needed for storage.

Details of the FD-SI were not revealed, suggesting it is a design concept ‘shell’ at this stage and a long way from anything approaching reality.

The concept vehicle on the stand boasted a two-tone exterior with partially covered wheels and an upright cab..

The driver is seated behind a retractable steering wheel and will look at a high-tech heads up display projecting relevant driving information onto the base of the windscreen.

They will also have a rear view monitor which has been mounted into the steering wheel allowing drivers to see what’s behind them with a quick glimpse down.

“We want to support the drivers, the front-line people of “Transport,” with unconventional ideas,” Isuzu said.

Also on the Isuzu stand is more evidence that the electric revolution is surging down the wires. While not as boots and all as Fuso Isuzu showed its ELF EV light duty concept truck although it is the third Tokyo Motor Show that it has been shown at. It is now six years old and seems no closer to reality. 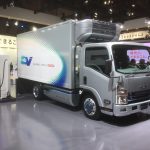 ELF is a zero-emission, low-vibration delivery truck using a lithium-ion battery that will power it for around 100 km on a single normal or fast-charge, but this is expected to improve as battery and powertrain technology improves.

It is a 4×2 light duty truck with rear-wheel drive and conventional independent front suspension and leaf sprung rear suspension. Compared to Fuso’s effort Isuzu’s seemed a little lacking in lustre and commitment.

UD PRESENTS ELECTRO-MOBILITY AND AUTOMATION AS CORNERSTONES OF FUTURE

UD Trucks has unveiled some impressive technology and vehicles  at the Tokyo Motor Show this week including the Quon Concept 202X and its Hybrid Raijin Electromobility. UD says its Quon Concept 202X will be ‘intricately connected’ […]

MACK TO THE FUTURE

Mack is set to unveil a new Class-8 truck in less than two months and will continue to tease the public with an online campaign until then. The US truck brand is uploading snippets of […]

NEW DAF ANNOUNCED AS EURO TRUCK OF THE YEAR FOR 2018

Editors and journalists from 23 of Europe’s leading truck magazine have voted on and announced that the 2018 International Truck of the Year is DAF’s new XF/CF truck range . The jury of 23 commercial […]