Bennelong Point in Sydney, home of the Sydney Opera House, has not seen as many big guns since Fort Macquarie was dismantled in the middle of the last century, but Daimler rolled out the heavy artillery last week for the launch of its all new and all important Cascadia in Australia.

The head of the biggest truck manufacturer in the world, Martin Daum, chairman of Daimler Trucks globally, was joined by the president of Daimler Trucks North America, Roger Nielson and the head of DTNA sales and marketing, Richard Howard, for a press conference at the Sydney Opera House, that was a display of strength, clearly made to demonstrate the seriousness and commitment Daimler Trucks is making to Freightliner in Australia.

After years of having to take what they were given from their overseas masters, Daimler Trucks Australia is now pretty happy that it will be receiving a truck that is aligned with its North American masters and the fact that it will get the latest and greatest technology and innovations, virtually as they become available in the US.

Following the press conference at the Opera House earlier in the day, the entourage of Daimler senior management joined the local Daimler Trucks Australia team led by Daniel Whitehead and Freightliner boss Stephen Downes, for a lavish gala launch event at Sydney’s Carriageworks where around 300 customers and dealers gathered for a spectacular local launch of what is North America’s biggest selling heavy duty truck. 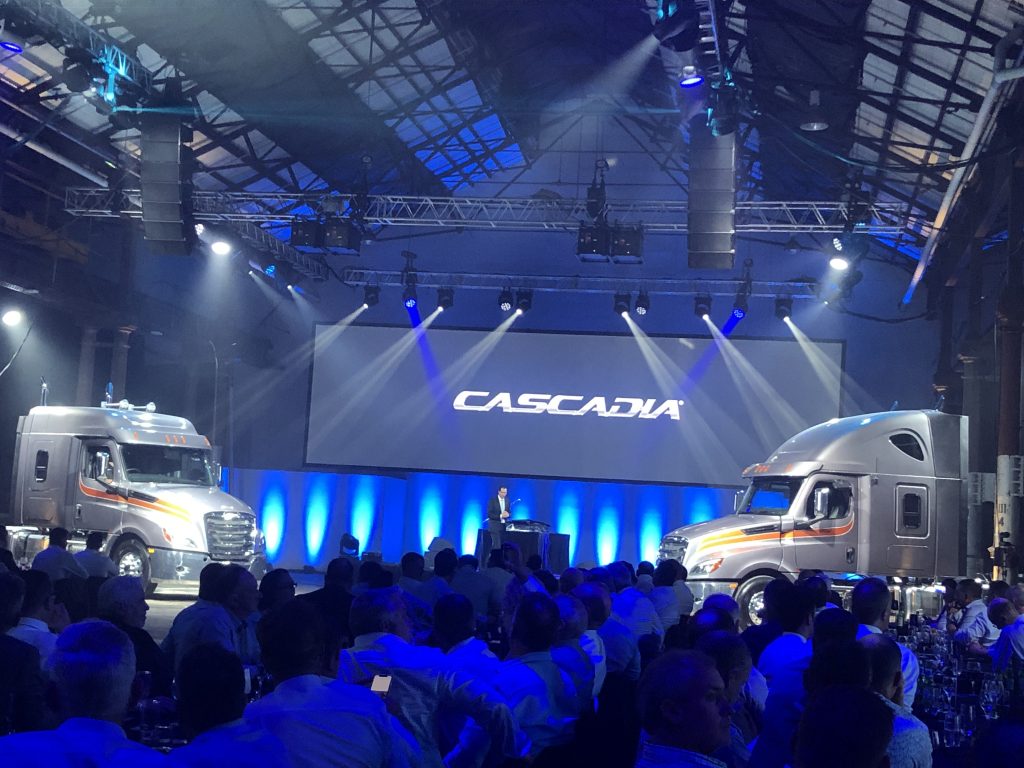 Martin Daum’s presence underlined the efforts of Daimler to make the Freightliner a winner down under and reinforced the $AUD100 million spend made to bring the Cascadia to the Australian market after two years fo testing and a lot more planning and engineering work.

“I believe there is no such thing as a world truck, you have to adapt product to suit particular environments and customer demands,” said Daum.

“That is what we have done with Cascadia and we listened to our customers in Australia and New Zealand and developed this truck specifically for them,” he added.

The testing program on Australian roads has been carried out with real time telemetry reporting directly back to Freightliner engineering people in Portland, Oregon, with numerous changes and adaptations to design and production in real time.

Stephen Downes, said the team has worked tirelessly to ensure this is the right truck for Australian operators and is ready for uniquely tough local conditions.

“We run our trucks hotter, harder and longer so we needed to make sure the Australian Cascadia would be up to the task,” said Downes.

“We made changes and are extremely confident this truck is ready to start saving money for customers and delivering an on-road experience we know drivers will love,” Mr Downes adds.

Daimler Truck and Bus Australia boss, Daniel Whitehead, said the introduction of the Cascadia represents a new chapter for conventional trucks in Australia.

Iveco Australia has promised to showcase up to 10 trucks from its Iveco and International product line ups at next month’s Brisbane Truck Show, spanning from vans to heavy duty trucks. Among the display will e […]

Freightliner has taken the covers off the 2018 evolution of its top-selling model, the Cascadia with claims of a five per cent improvement to fuel economy. The redesign has focussed on aerodynamics, enhancements to the […]