This years Brisbane Truck Show was always a critical one for the organisers as the Queensland commercial vehicle expo seeks to cement its position as the number one show in Australia and in terms of manufacturer support and glitz it did just that with a big bold and brassy opening to the event at the Southbank Exhibition Centre.

As soon as the doors opened to the public at 10am on Thursday the halls filled with people clamouring to see the latest in road transport and to perhaps talk turkey with the manufacturers.

While plenty have been threatening to not go to next year’s scheduled Melbourne Truck Show none of the majors even uttered a word about not being at this Brisbane Show, put simply this is the premier show and its time the industry acted as one to cement the position.

Having said all that, crowds were down on than the last show in 2013 with the CVIAQ proclaiming in an exemplary demonstration of spin that, it had ‘a strong performance retention’ following the good growth registered in 2013. Attendance on day one this year was 6778, down by 100 on 2013, 8365 on day two, roughly about 600 down on the last show and a massive 2445 down on the Saturday which is normally the most popular day at the Show. In 2013 the event drew 14445 on day three, this year it was ‘just under 12000’. Figures for the final day had not available at the time of writing but it is doubtful they would have topped the 2013 total for the four days of 37,774.

Sometimes however, we should look at quality not quantity and the manufacturers were generally reporting that the true buyers were out in numbers even if the great herds of tyre kickers and happy snappers weren’t there in such strong numbers this year. 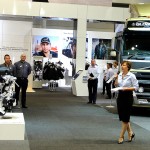 On the ground the array of stands are impressive with outstanding displays at Navistar/Cat, Daimler, Kenworth, Scania and Volvo/Mack/UD. New models were unveiled by Mercedes Benz, International, Cat, Western Star, MAN and DAF and their was a real feeling of confidence in the wake of the Federal Budget announcements two days earlier.

Paccar captured stand of the show, a decision that had many pundits scratching their heads, it was good but not outstanding, while Navistar was the pick of many experts, instead it picked up Truck of the Show with a vivid red and white Cat CT 630 taking a less than impressive perspex trophy. Navistar picked up another going with the Lonestar Blade winning People’s Choice Truck of the Show. 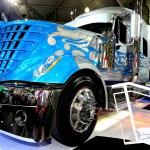 The vote amongst the media for the most fun stand on the media walk around went to industry lightweight Foton. The Chinese brand was pushing its Silverback alloy tray models and linked the Silverback branding to the primates of the same name with a massive fibreglass Gorilla front and centre on the stand and an actor in a Gorilla suit hamming it up with Foton boss Alex Stewart during the media presentation. It was a fun and irreverent presentation that had people laughing and some passing references to its Japanese rivals particularly Fuso an its Sumo wrestling icons. 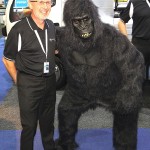 The reintroduction of the International name plate saw Navistar featuring the Lonestar Blade centre stage and the spectacular retro look International proved a real drawcard but while the Navistar people say there are no current plans to bring the truck to Australia they are not ruling the possibility out. While the Lonestar was the drawcard, the real Inter news was of course the relaunch of the famous name plate with the ProStar on the stand to usher in the new era for the brand. Meanwhile on the Cat side of things, the big triples-rated CT630HD model was launched as we indicated in T&TT’s last issue. The 630 HD rates at up to 130 tonnes and is powered by the Cat C15 ACERT. it was a spectacular addition to the line up and what was probably the stand out display at the show. 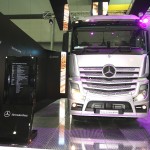 Daimler also boasted a spectacular display across its three brands most significantly with the launch of the next generation Benz Actros.The new Actros was unveiled on the stand and certainly gave Justin Whitford, the GM for Mercedes Benz Truck and Bus, plenty to crow about. The new Actros boasts new engines with a choice of 11, 13 and 16 litre capacities, all of which are directly related to the Detroit DD 13litre and 15.litre donks. The big Benz also has been built with an all new cabin to give the new straight six plant more room, necessary because of the switch from the V6 and V8 engines that use to power the Actros range. powhich amongst its many , as it now has to accommodate a straight six engine and not the V6 and V8s of the current generation Actros.

Benz has some Actros models already in test programs down under and it will hit the market later in the year.

Down at Penske the world’s worst kept secret was finally confirmed with the launch of a Freightliner in Western Star clothing. The Western Star badged 2800 SS, which is sold in the US as a Freightliner M2 Business Class, was revealed for the first time and it was a global premier not just an Aussie one. It certainly has the tongues a wagging about what Benz intends to do with its Freightliner brand not just in Australia but anywhere in the orld. Rarely does the Brisbane Show get a World premiere but it happened this year, albeit with a truck that is actually rebadged sold in the USA as a Freightliner. 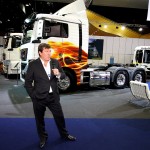 on the way. It certainly gives Roger Penske a US truck that he can push into the light end of the market in Australia as well as for his growing Truck Rental business.

The question is after a disappointing first full year for Penske in the Australian market in 2014 will these new models help lift the underperforming brands for the much lauded Penske empire.

Down the end of the halls on the Stand of the Show   the Paccar empire displayed with the confidence of a company that continues to dominate the heavy end of the market. The new metal on its stand was European not US with the DAF LF rigid breaking cover with a new cab design and interior and power from Paccar’s own PR engine in either 250 or 286 horsepower options. 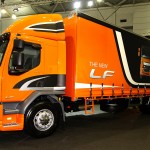 At Iveco a clean and well organized stand saw a new Cursor engine revealed with the 13-litre Cursor Series II engine unveiled on the stand. The new Cursor will be available in selected Stralis and Powerstar models and is claimed to have been engineered for Australian conditions, with revised a 560 hp output and 2300 Nm of torque.

The question is will a successful Brisbane Show , in terms of manufacturer support and business focus hammer another nail into the Melbourne Truck Show coffin? Only time will tell.

We will have full coverage of the Show in our next issue of Transport & Trucking Today on the newsstands next month.

California air quality regulators have announced they have approved $US150 million in grants for projects that will put at least 187 zero-emission medium- and heavy-duty trucks into service over the next several years. An additional […]

SANTA’S COMING TO TOWN – IN AN INTERNATIONAL

If you thought the ‘Big Man’ in red  was going to arrive  on a sleigh towed by reindeer then think again. International has built a brightly decorated and shiny red ProStar to Santa a helping hand […]