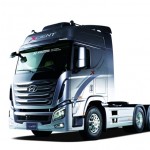 Hyundai Trucks are about to make a  comeback to the Australian market after an absence of close to two years.

The Korean maker has appointed the Peninsula Motor Group as distributor for its truck range after its own subsidiary, Hyundai Australia lost interest in selling trucks and shut the operation down in October last year.

Well known automotive industry identity Dilip Kumar, managing director of the Peninsula Motor Group, based at Bankstown in Sydney, has secured the rights to Hyundai Heavy Commercial Vehicles. Kumar has lured Anthony Hulme, former senior manager for truck sales and marketing at Hyundai Australia, as general manager for the new organisation, which will be known as Hyundai Commercial Vehicles Australia.

HCVA’s Anthony Hulme says it will launch revised and updated versions of the HD range of 4.5 to 8 tonne light trucks as well as the new generation Xcient medium/heavy range, when it swings open the doors in August. Xcient, which is offered overseas with either Hyundai’s H 10 litre inline six cylinder engine with up to 420 hp or the 13 litre Hyundai Powetec I6 engine with around 520 horsepower and 2500 Nm, will be available in either a rigid or prime mover configuration.

Its understood HCVA is also looking at medium duty models but is awaiting confirmation of revised and updated offerings in the 8 to 17 tonne medium duty sector. The H350 high capacity cargo van, which is in the ilk of the VW Crafter/Iveco Daily, is scheduled for launch in Australia in late 2016.

Kumar has invested more than $3.5 million in a new facility at his base near Bankstown airport as the distribution centre and admin base for the new range of Hyundai trucks and vans the company plans to sell here.

Hyundai Australia decision to discontinue its involvement with trucks in October last year opened the door for Kumar to negotiate for the rights to the Hyundai truck business in Australia. Peninsula operates large Holden and Hyundai passenger car dealerships and was also involved with the importation and distribution of Chinese bus brand Yutong, but it is understood they are no longer involved with the bus maker. This may open the door for Kumar to secure the rights for Hyundai bus in Australia.

Hulme says the company is planning to have around 13 dealers nationally by the end of 2015 and intends to double that by the end of 2016. Hyundai has stated that it will invest close to $2billion between now and 2020 on a major commercial vehicle offensive specifically targeting the US market.

Social media is derided  and criticised  for many of its negatives and blamed for just about every thing that ails society today, but the ATA and Brisdgestone have hailed  Facebook for helping uncover the latest […]

Isuzu Truck has announced it has created a new role entitled marketing manager, CRM and Digital and appointed Michael McLean to the role. Dealing with customer engagement and relations management, the position will also strategically position […]

The Federal Government has announced it is investing around $330 million in sealing key sections of what is known as the Outback Way, the 2,800 kilometre route that links Laverton in Western Australia with Winton in […]