Ford has taken the covers off its much anticipated new Ranger in what will be a vital new model for the Blue Oval and one that is sure to give Toyota’s HiLux a run for its money  when the Ford hits our roads mid-way through next year.

From all reports the new Ranger  cuts a strong image in the flesh and, like its predecessor, the current Ranger, was designed and developed right here in Australia, although there are doubts the next gen Ranger will be homegrown.

The current Ranger accounts for about two thirds of Ford’s Australian sales volume, underlining just how important the new model will be to  a company that some pundits have dubbed ‘Ranger Motor Company’ because of that reliance on the ute model.

The Ranger models we get are built in Ford’s production facility in Thailand, where just about every ute for this market is built these days.

The Ranger boasts an impressive driveline menu to go with its aggressive good looks, with a 3.0 litre V6 turbo diesel which is also used in Ford’s US F150 pick up, powering the flagship models. 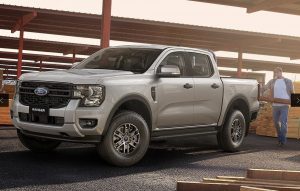 Along with the top shelf V6 diesel lower spec models will be available with both single and twin turbo 2.0 litre turbo diesels. All will be mated to Ford’s very good 10-speed automatic and with those options the new Ranger will certainly be well equipped to take  the fight up to its Toyota rival.

Of course the new Ranger will also share its underpinnings and drivelines with the next  VW Amarok, with the German maker deciding a shared ute platform with Ford was a better option than doing a new generation Amarok. If the new Ranger can deliver the same on road dynamics as the current Amarok  then it should be a winner.

The F-150-sourced 3.0-litre V6 turbo-diesel is likely to deliver a best in class torque output of 600Nm which will give stum pulling capabilities, while the 10-speed auto has been given a birthday with altered ratios and a new torque converter for smoother shifts, while automatic four wheel drive will also be a part of the package.

However even the more cooking class 2.0-litre four-cylinder twin turbo-diesel, will deliver around 160kW and 500Nm of torque, so all drivelines will offer better performance of the old 2.2- and 3.2-litre diesels, both of which are being dropped from the new model.

Ranger 4x4s will feature six driving modes including a crawl function in their multi-terrain system with automatic models also getting a new rotary gear selector on the centre console. 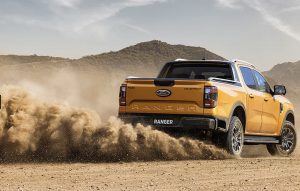 In the cabin the top end models will get a big 12.0-inch touch-screen infotainment system in the centre with another 8.0-inch widescreen digital instrument cluster, and even the entry versions have a 10.1-inch vertical touch-screen and Ford’s latest SYNC4 infotainment system which can have its software updated via  Wi-Fi along with remote access to functions via the FordPass smartphone app, including the ability to start the engine and to control air conditioning.

Ford has revealed that the Rangers will be chock full of features with a vast range of safety and technology  additions that really enhance its market appeal.

Such things as more safety airbags including a centre front airbag, and a 360 degree  camera in top of the tree models, as well as an upgraded traction control and stability system will ensure the Ford will be well ahead of the opposition when it comes to safety and will also please its German joint venture partners.

The  also gets all new seats, side steps lots of  soft-touch surfaces and convenience external down lamps that light the ground around the doors when unlocking.

Serious off roaders will be glad of  the space Ford has designed under the bonnet for a second auxiliary battery , which along with a plethora of USB-A, USB-C and 12V outlets, and  even a 240V GPO socket as well lighting in the tray of some variants. 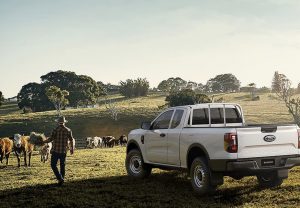 Ford is saying the Ranger’s ladder frame chassis has been improved and revised with both the wheelbase and track increasing by 50mm, with a reworked double-wishbone front suspension while the rear dampers have been moved outboard on the coil-sprung live rear axle. Ford promises improved stability,  as well as better ride, handling and refinement, which is another aspect that should please VW and amarok loyalists.

In fact the outboard rear shocks have allowed Ford engineers to eek out another 50mm out of the wheel arches  enabling the Ranger to match the current Amarok’s exceptional tub width that already allows a standard pallet to fit in the tub.

Even with the longer wheel base and track Ford is saying  the Ranger will still have a comparable turning circle of around 12.7 metres which it attributes to a clever front suspension geometry re design.

The new Ranger sounds and looks like it will give Toyota  a few headaches, with the Japanese maker a long way away from a full HiLux redesign. The current Ranger has regularly outsold the HiLux in recent months, and so long as pricing is right, the new Ranger should put smile on the faces of Ford bosses.

ISUZU WEBINAR COULD GIVE A UTILITY BELT

Isuzu Australia is presenting a webinar to help Australian tradies and business owners determine if their load is too much for their Ute IAL Chief Engineer, Product Strategy, Simon Humphries will host ‘Is Your Load […]

Hino  has announced its dealer of the year gongs at a gala night in Sydney recently, making it the first of the leading truck makers to hand out its 2019 dealer plaudits. At the awards, […]

Volvo Group Australia has revealed that it intends to continue to distribute UD Trucks in Australia even after the impending sale of the brand to UD is completed late in 2020. Volvo Australia has issued […]