Hyundai’s play on using the same  small ‘i’ nomenclature that Apple popularised with its gadgets, appears to be on the way out, with the company dropping the iLoad badge on its van range, replacing it with the new Staria-Load.

The launch this month of the Korean maker’s new van offering, promises more cargo space, more modern styling and a new passenger car based platform to replace the popular and very capable iLoad.

The Staria Load will be available in either a two-seat van or five-seat crew cab configuration, with either a liftback or twin swing tailgate.

The new van features a snappy wedge shape, contemporary design, with a swag of advanced standard features, that will build on the ‘strong legacy of the long lived iLoad‘ according to Hyundai. 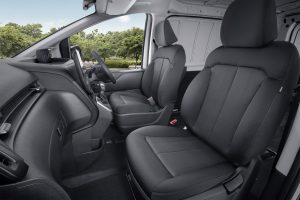 While the old iLoad was a rear drive van built on a commercial platform, the new Staria-Load has been built on the same platform as Hyundai’s Sante Fe SUV and has a front wheel drive configuration.

Hyundai claims the new platform is lighter and more rigid than the iLoad, and will provide ‘car like refinement, handling characteristics and ride quality, creating a more approachable and familiar driving experience without sacrificing performance’.

While it’s moved to a passenger car platform and front drive, Hyundai says that performance, capacity and dependability have not been sacrificed, and in fact it claims they are better than in the iLoad.

The new van features a solid rear axle with leaf springs, enabling it to provide a strong set up for heavy loads, while the company says the new platform and powertrain have enabled it to increase braked towing capacity up to 2.5 tonnes.

The move to a front drive configuration brings Hyundai into line with some of its key Euro rivals including VW’s Transporter, Renault’s Trafic and Ford’s Transit, but leaves market leading Toyota’s Hi Ace in the rear drive realm.

Joining the dots one imagines that the move to a platform shared with Sante Fe could possibly open the option for an all-wheel drive variant of the Staria-Load. Hyundai already offers an all wheel drive variant of the passenger oriented Staria, so it is possible the Staria-Load will also get that option at some time, putting it on an equal footing with the likes of VW’s 4 Motion Transporter. 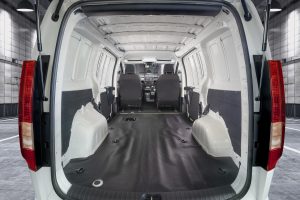 While the cargo area is higher and boasts almost 11 per cent more cargo volume, the load height is 41mm lower than iLoad, making for easier and safer loading.

The Staria-Load gets eight tie-down points throughout the cargo area and a variety of mounting points for accessories as well as felt board trim in areas where objects may damage the interior.

Its powered by Hyundai’s impressive 2.2 CRDi turbo diesel, coupled with an eight-speed automatic.

The 130kW 2.2 litre oil burner pumps out a very strong 430Nm of torque between1,500 and 2,500rpm and boasts fuel economy of around 7 litres per 100km, which should win it plenty of friends in the delivery business.

In terms of creature comforts  the Staria-Load gets an 8” touchscreen infotainment display boasting wireless Apple CarPlay and Android Auto compatibility and Multi-Bluetooth connection, It also gets keyless entry – with remote window open/close Leather-appointed steering wheel and a Qi wireless smartphone charger as standard . 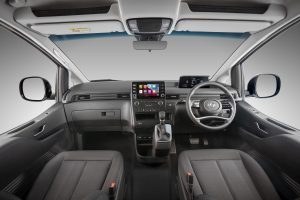 Hyundai says pricing for the new Staria-Load 2.2 CRD eight speed auto will see the  two seat van with rrp of $45,740, while the five seat crew van has a price tag of $48,240, and you can have it in any colour as long as it is either creamy white or shimmering silver, with the only option being a premium paint package for an extra $695.

Hino  Australian has again been recognised as a global leader in parts and service, with its parent company in Japan placing the local subsidiary in the top echelon of distributors worldwide. For the 12th straight year, […]

Despite, or some might say as a result of the Covid crisis, you may have noticed there is a nationwide skills shortage and that is being felt in the transport industry  particularly in terms of […]

NO NEWS ON INTERNATIONAL’S AUSTRALIAN RETURN

Meantime here in Australia we are still waiting to hear any information or details around the re-introduction of the International brand down under. Truck E-News reported back in mid-March that a decision was imminent and […]