Paccar has revealed a new model Kenworth in its home country of the USA, unveiling the new Kenworth T680 ‘Next Generation’, featuring a  sleek design that the company says will deliver as much as six per cent better fuel economy thanks to its aero shaped body work and new styling.

Kenworth unveiled the new on-highway flagship T680 in the US on 11th February, showcasing improved aerodynamics, more driver-focused improvements and other features, including a huge 15-inch digital screen dash display.

The aim of the design was  to keep the airflow closer to the cab and reduce drag-causing turbulence while the EPA 2021 Paccar MX-13 12.9-liter engine and Paccar Powertrain, which also offer fuel efficiency gains.

“We exceeded the superior fuel efficiency of the current T680, through aerodynamic advancements and design innovations. As a result, Kenworth T680 Next Generation is the most aerodynamic truck in company history,” said Joe Adams, Kenworth chief engineer.

Behind the cab, Kenworth now has optional side extenders that extend 71 cm  or an additional 22cms which help to close the gap between the prime mover and trailer and smooth airflow from the top and sides of the tractor onto the trailer. Providing a good fuel economy benefit, the side extenders can be spec’d to open on either side of the prime mover to allow frame and component access. 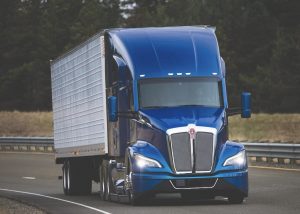 The Kenworth engineering team says it has also addressed airflow under the chassis instead of just around the truck.

“Changes to the hood and bumper keep airflow closer to the cab and reduce turbulence,” Adams said.

“The hood is 20.3 cm narrower than before and the restyled, aerodynamic bumper maintains the same approach angle and ground clearance as the classic Kenworth T680,” he said.

“The ground clearance in front is the same as the current T680 while the bumper now flows back under the chassis to guide airflow,” he added.

The new Kenny gets LED headlamps, with a built-in infrared heater to quickly clear ice and snow, not something that would be a priority if  elements of the truck were brought downunder.

Newly designed headlamps flow with the hood and integrate daytime running lights and an amber turn signal with new side indicators for better visibility to surrounding traffic.

While the  design team  had developed more new aerodynamic touches from the cab back, it has also redesigned the cab entry steps into the cab with a more stair-like entry. 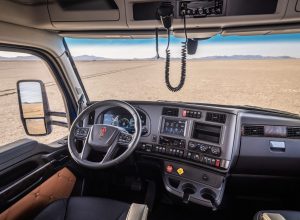 As is now common with Daimler trrucks, Kenworth 680 drivers will be able control the digital display with ‘intuitive’ controls on a new ‘SmartWheel’, combining cruise control, radio functions and info on the new digital instrumentation system at their  fingertips.

The Digital Display also offers advantages when the truck is parked. When the driver presses the Exterior Light Self-Test switch, for example, the truck runs a full System Check and gives a quick analysis and summary of multiple systems statuses on the display.

When a driver pulls in for the day and shuts the truck off, the screen transitions to a Trip Summary view, and if equipped, can even provide a Driver Performance Assessment report and coaching advice. A Drive Summary, which reports statistics on information such as average fuel economy, idle time, cruise control usage, as well as any potential mechanical issues, also appears at the day’s end.

The T680 Next Gen also offers a suite of driver assistance systems including  Lane Keeping Assist and Torque Assisted Steering as options for the first time in the Kenworth US lineup, all of which are delivered via the well established Bendix Fusion system and also includes Adaptive Cruise Control, Lane Departure Warning, Collision Mitigation and Side Object Detection.

The new T680 is being made available in day cab, 40-inch, 52-inch and 76-inch-sleeper configurations in the USA.

Sleeper side extenders have been designed to open to allow for frame access with the tighter trailer gap, while the new aerodynamic hood is available in two sizes – 125-inch BBC (standard) or 119-inch BBC (MX) – with fairings or a split fender set up.

The T680 Next Generation is expected to ramp up production in the second quarter of 2021 and US customers will be able to order either the current or the new version concurrently until at least the end of the year.

The phase-out of the previous T680 will depend on customer demand, Kenworth officials told reporters in a press conference call following the unveil. It will be interesting to see  how much of the T680 in the US is borrowed and included in future updates to Paccar Australia’s local T410/T610 models in the future.

Volvo Trucks North America (VTNA) has said its work towards automation is focussing on safety and the driver, and is not aimed at eliminating drivers but instead making the lives of professional drivers easier and […]