The Acco badge is legendary in the Australian truck industry. This is a truck  that can track its history  back to the early 196 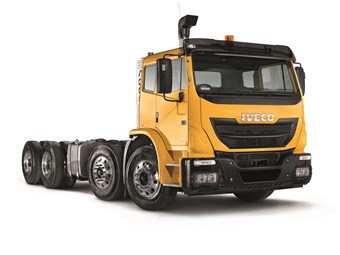 0s  and in fact even further back to the Blitz wagons used by the army in WW2.  Originally an International  the Acco  became an Iveco with the demise of Inter and Iveco’s take over of the Dandenong operation a decade or so ago and the Acco story has continued on. The Acco’s  cab may look more contemporary today  but it is still a big box on a big strong chassis  that still has tremendous appeal in the waste  industry and amongst concrete agitator operators. Well the good news for Acco fans is that Iveco has unveiled its new, modernised range of Accos for Australia. we may have lost all our indigenous car models withe the demise of the Falcon and Commodore but we still have an Australian truck The updated Accos will be available in 4×2, 6×4 and 8×4 configurations,with somer practical and cosmetic improvements. “Iveco engineers have introduced many  improvements in the latest release,however certain aspects of the Acco – qualities that have worked year after year have remain unchanged. The model’s low tare weight is the most competitive in the market and cabin entry and egress is completed with minimum effort – an important consideration for the driver that’s in and out of the cabin all day,” said Iveco product manager Joel Read. The new Acco retains the basic cab shape that can be traced back through its lineage to 1972 with some newer design elements  borrowed from other Iveco models. A range of  exterior components have been improved including the addition of side deflectors, bumper-encased indicators and a three-piece steel bumper. With a nod to the latest electronic technology the concrete agitator variant will be available with  electronic stability control (ESC). The Acco engineers  back in ’72 could never have dreamt of it! However it is only on the Agitator  variants which were given the priority for stability control  because of their higher centre of gravity. “We identified the rollout of ESC would start with the 8×4 agitator specification and will evolve to other models in the future. Agitator owners can now rest assured that they have this important additional safety feature,” added Read. Power from the updated Euro 5  spec 8.9 litre six-cylinder diesel output has stayed much the same as the previous models, with power ranging from 280hp (209kW) to 340hp (254kW). The  Euro 5 engine uses selective catalytic reduction (SCR) and is mated to an Allison generation 5 6-speed automatic transmission. More than 85 per cent of the Acco’s componentry is sourced in Australian , meaning  just about everything save for the driveline which Iveco reckons is  a key advantage for the Acco range being designed and built locally, “The flexibility offered through local manufacturing has made the ACCO a favourite platform for body manufacturers to work with,” Iveco national key accounts manager Lloyd Reeman says. “More than 78,000 Acco units have been produced at the Dandenong factory since the first model was released commercially in 1961.”

Hino’s US operation has announced it will be adding Wabco adaptive cruise control, brake control technology and advanced driver assistance to its trucks from next year. When and if this technology arrives down under is yet […]

MCGUIRE RESIGNS AS CEO OF ATA

Ben McGuire has shock the truck industry with his resignation as CEO of the ATA, announcing he will leave the industry body in September to take up a commission as an officer with the Royal […]

What if you were hosting the biggest truck launch in your company’s history and no one turned up.  That is exactly what happed for Volvo with the launch of its new truck range in Gothenberg […]