PACCAR has officially opened its new parts distribution centre (PDC) in the Brisbane suburb of Berrinba, making it the second PDC for the company in Australia joining the established operation at PACCAR’s Australian HQ at Bayswater in Melbourne.

PACCAR claims the new warehouse will reduce delivery times to dealers and boost parts availability to customers across its retail network. The new purpose-built facility boasts more than 6,000 square metres of warehouse space and shipped its first orders in December.

The new facility will service locations throughout Queensland and northern New South Wales and by the end of 2018 it will supply locations in the Northern Territory and regional NSW.

PACCAR claims that the new Brisbane PDC will enable it to offer next day delivery to 74 per cent of its dealers and says this will represent an increase of 68 per cent in next day deliveries. 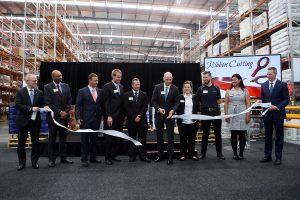 “PACCAR Parts’ mission is uptime – moving customers and businesses forward. Ensuring the availability of parts and service to customers is the number one thing we need to do in the parts business,” PACCAR Parts general manager Chris Scheel says.

“For primary dealers we’re now delivering next day versus 3-4 days previously. For VOR’s (vehicle off road) the dealer drops in an order, we pick the part, and it’s received within hours,” he says, adding that dealers will also benefit from reduced freight cost in these emergency situations.

The Berrinba warehouse is the first PACCAR PDC to use 100 per cent voice pick technology. Staff are fitted with headsets that tell them where to go and what to pick – and also in what order to determine the most efficient pick pattern.

“Voice-pick technology allows our distribution associates to have two hands free and keep their eyes where they are picking. This enhances quality, efficiency and safety,” Scheel says.

secured in the floor. This system frees operators from steering responsibilities in very narrow aisles, such as those that stock Paccar’s smaller stock items.

“Fast-moving parts are stored at the front of the building to really speed up velocity,” Scheel adds.

Scheel adds that, nationally, PACCAR Parts has also been working closely with dealers to improve retail availability. This has resulted in a 45 per cent reduction in emergency orders over the past five years; and 97 per cent retail availability He notes this has been achieved in a period when stock-keeping units have grown by 35 per cent.

This growth will be sustained, in part, by big investments both in product as well as the dealer/retail network.

Speaking at the PDC opening, PACCAR Australia managing director Andrew Hadjikakou said the company would invest heavily in new product over the next two years, including two new Kenworth models under development (T410 and T360); and the move to locally manufacturing of DAF, starting with the best-selling CF mid-year.

Significant further investment is also slated for PACCAR’s 80-strong retail network, with five new locations added in 2017 and another four to come on line in 2018. At the same time, PACCAR is in the midst of expanding the TRP store network, with new outlets scheduled to open in Ballarat and Pakenham through March and April.

“To support this, this facility has become absolutely necessary,” Hadjikakou notes.

Daimler’s Japanese offering Fuso has introduced a standard five year warranty across all new trucks and Rosa bus models, making it the only Japanese manufacturer on the Australian market with such a guarantee. The warranty […]

ALL ELECTRIC eACTROS TESTS IN EUROPE

As we predicted on Truck & Bus News earlier today the deal has been done for International Trucks to be reintroduced into Australia with CNH Industrial, the parent company of Iveco to become the distributor […]