Scania Australia has announced it is fitting Advanced Emergency Braking as standard to its stock prime movers with outputs of 440 hp and above.

The company says it is continuing its push to help reduce death and injury on the roads with the adoption of Advanced Emergency Braking on most of its prime movers. The technology has been fitted to stock vehicles imported into Australia since the start of the third quarter of 2015.

Scania is the first heavy vehicle importer in Australia to offer this new generation safety equipment as standard on high output prime movers with 440 hp or more.

The Advanced Emergency Braking system is part of a safety upgrade that includes Lane Departure Warning and Adaptive Cruise Control. AEB integrates the radar and camera functions of both systems to provide autonomous emergency braking warning and intervention, to prevent two moving vehicles colliding, or the Scania truck running into stationary traffic.

This potentially life-saving technology is now fitted to all stock prime movers destined for regular line-haul and distribution work, with engine outputs of 440 hp and above, across the full P, G and R-series ranges of cabs. The Advanced Emergency Braking system can be specified for the majority of other on-road vehicles in the Scania truck range, where it is not fitted as standard.

“We wanted to offer our customers this potentially life-saving feature and so we made it standard on stock vehicles with outputs of 440 hp and above,” says Ian Butler, Scania Australia’s New Vehicle Technical Support Specialist.

“We also engineered a full size bull bar locally that is compatible with the system’s radar, in association with Advanced Herd Bars, one of our national suppliers.” 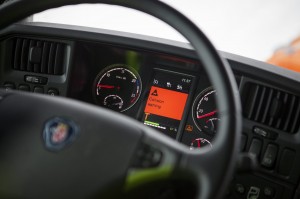 The AEB system is able to autonomously slow the truck or bring it to a complete stop, if for some reason the driver fails to respond to circumstances that may lead to a collision.

“We believe this could be of significant benefit in preventing a possibly fatal accident occurring, should the driver fall asleep or be incapacitated for some reason,” Ian Butler says.

Scania’s AEB is a driver aid only, and does not remove the responsibility from the driver for safe control of his vehicle.

In line with the company’s policy of offering customers tailored specifications, Scania vehicles may still be ordered without AEB, should customers elect not to provide this safety system for their drivers. 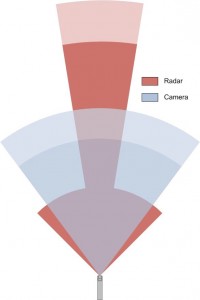 Initially, when the system detects the possibility of a collision with a vehicle in front, it will sound an acoustic signal and illuminate a red warning light on the dashboard.

If the driver does not react, and the risk remains, the AEB system begins to apply the brakes gently.

If there is still no response, for instance if the driver has fallen asleep or has been incapacitated, then the AEB system applies the brakes with full force in order to attempt to avoid an impact with a slower moving or stationary vehicle that it has detected.

The driver can interrupt the warnings or braking by pressing the AEB switch on the instrument panel, or by applying the brake pedal, or alternatively if he judges it safer to take positive action, he may apply the accelerator pedal, including activating the kickdown, and steer away to avoid the impact. AEB is active at speeds in excess of 15 km/h.

It is important to note that the Scania Advanced Emergency Braking aid does not adapt to driving conditions or weather.

To see the Scania Advanced Emergency Braking system in action, a demonstration video may be viewed on YouTube here: https://www.youtube.com/watch?v=S1EbyBo9dMY

Amidst the boom in North American truck sales, Daimler Trucks North America (DTNA) has announced a 39.8 per cent market share across the larger Class 6-8 truck segments in 2017, an all time high for […]

Volvo Group Australia has announced it has  restarted its production after a four week shutdown at its Wacol plant in Brisbane as a result of supply chain disruption. Work recommenced at Wacol factory on the […]

Rob Griffin has been confirmed as the new national sales and operations manager of Freightliner in Australia following his departure from the Paccar Group recently. Freightliner Australia has strengthened its team by appointing Robert Griffin […]