Things are clearly percolating at leading bus builder Volgren with the company recently breaking a delivery record while also celebrating a major milestone with the 4000th bus rolling out of its Victorian facility at Dandenong.

Volgren recently achieved a record by delivering 137 buses to one customer in a 12 month period handing over 122 rigid and 15 articulated buses to the WA Public Transport Authority during the financial year 2014/15.

The company set the new record from its Malaga facility in Perth surpassing its previous record of 127 buses delivered to the Brisbane City Council in 2008/09.

Along with that the company recently celebrated the completion and delivery of the 4000th bus from its Dandenong plant in Melbourne. The vehicle, a low-floor route bus was handed over to long-standing customer Buslink NT at a ceremony last week. 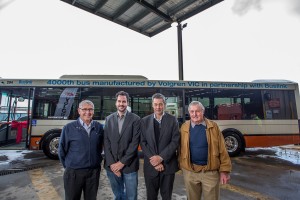 Volgren chairman Geoff Grenda handed over the bus Buslink NT managing director David Hannon with the new bus sparkling in its striking Buslink ochre-and-white livery alongside the first Volgren bus ever built ,VG001 which rolled off the Dandenong production line in 1977.

Volgren CEO Peter Dale paid tribute to the company’s employees past and present for enabling them to achieve the milestones recognising their loyalty and achievements.

“Our founding company Grenda and Buslink are long established family companies and the Hannons and Grenda families have grown them into very substantial bus businesses across Australia,,” said Peter Dale.

Buslink had purchased buses from Volgren for a quarter of a century and the buses have lived well in the harsh conditions of the Northern Territory.

Volgren has supplied a total of 244 buses to Buslink since 1989 with another 11 currently in production.

The Dandeniong factory has supplied 184 of them while 64 were produced at Volgren’s Eagle Farm factory in Brisbane.

The oldest Volgren bus on the Buslink fleet a VG505 is 22 years old, has covered 1.3 million kilometres and it’s still going strong.

Meanwhile in Perth Volgren and PTA WA have enjoyed a close relationship with the Authority having taken delivery of a total of 1,424Volgren  diesel and CNG buses since the company won its first PTA WA contract in 1999.

The facility employs 75 people on site, with a similar number employed in the local supply chain and has injected more than $100 million into the local economy to date.

As well as the 1,424 PTA WA vehicles Volgren Malaga has also built 24 Transwa coaches and 150 other buses for export interstate and overseas – including double deck buses for Hong Kong.

To accommodate the facility’s growth, the company has recently invested $3 million in a factory expansion and engaged 15 dedicated employees for the manufacture of articulated buses.

Toyota has released an updated Coaster to mark the 40th anniversary of the bus model’s introduction to the Australian market. The 2017 Coaster is said to be stronger, safer and more comfortable with updated suspension, […]

British bus manufacturer Optare has revealed its plans for this year’s Euro Bus Expo in Birmingham next month by  confirming it will unveil the ‘next-generation’ of its electric bus range.  “We are promising to excite […]

Zero-emission charging and refuelling provider Electromotiv has announced it has signed a nine-bus deal with New Zealand operator Go Bus, the largest leasing contract in the Australian so far for the company. The multi-million dollar […]