Truck and Bus News had the privilege of travelling to the USA recently to preview and drive the new Mack Anthem, a truck that is a vital catalyst for taking the Mack brand to a new era.

Launched in the US in late 2017, the Anthem is a clever strategy for Mack and comes on the back of some significant investments in the Volvo owned brand’s manufacturing facilities in America.

Mack currently holds around 8 per cent of the US truck market, however it holds just 1.6 per cent of the line haul market. Anthem is really a targeted strategy to win more sales in the line haul market for the famed Bulldog. A cynic could say that the Anthem is little more than a cab redesign, however it is much more than that bringing a lot of new elements together to prove that the sum of the parts is worth more than the parts themselves.

Mack in the US has in the past couple of decades, concentrated on vocational applications with rigids and prime movers in construction, concrete, waste and in day cab prime movers for big fleets in local distribution work. Mack is the dominant player in the US waste truck market. Anthem gives Mack a truck to properly target line haul for the first time in decades. Line haul trucks command 42 per cent of the overall truck market and as US Mack execs say ‘you need to pay attention to it’.

The reality is the new Anthem cab and integrated sleeper is the first time the Bulldog brand has offered a full stand up cab with flat floor and walk through to the sleeper. This puts the Mack back on the shopping list for line haul operators 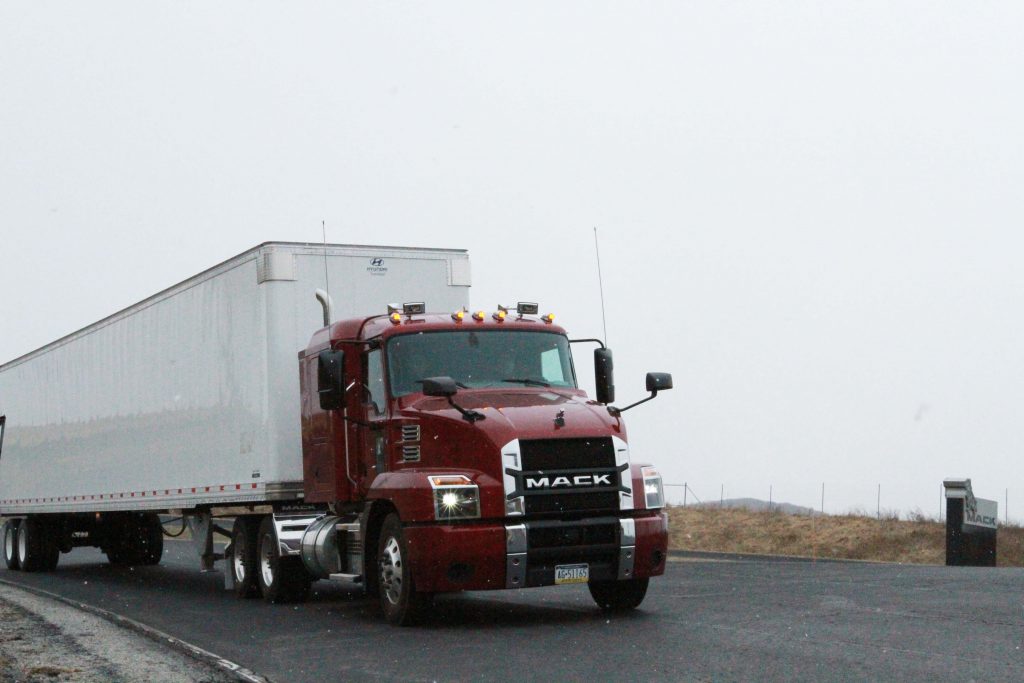 Mack Australia VP of sales and marketing Dean Bestwick was in the USA with the Australian media contingent and was ebullient about the prospects and opportunities the Anthem represent for Mack in Australia.

When Anthem does arrive on our shores some time in early 2020 potentially – although a firm timetable is yet to be determined – it will directly replace the current Granite model. However because Macks are local assembled in the VGA plant at Wacol and the local adaptation that enables, the Anthem cab will be adapted to all of Mack’s other Australian models, except for the MetroLiner. This means the Titan, SuperLiner and Trident will use an adapted Anthem cab and give Mack a full standup cab and sleeper to fight rival Kenworth’s T610 as well as line haul offerings from other truck makers.

“Mack has never had a fully integrated sleeper cab and finally we have one,” said a clearly happy Dean Bestwick, who has been pushing hard for the Anthem and its cab from the start.

In fact when asked if Australia was part of the consideration when it came to Anthem planning Bestwick’s opposite number in the US, Jonathan Randall was very clear. “Australia won’t let you ignore them!”

“This has been a 4.5 year program and Dean and his Australia team has been pushing hard from the start,” said Randall.

Some of Mack’s product planning team arrived in the US as the media contingent was departing to continue work on Project Anthem.

“We need 18 months for a full validation program but we can use some data from the US that may speed things up a little,” said Bestwick. Field tests of Anthem and Anthem adapted models are expected to start in Australia in late 2018. 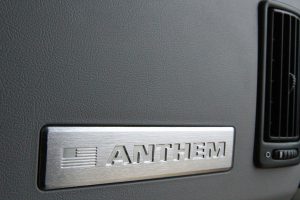 The Anthem is now in full US production at Mack’s Lehigh Valley Operation (LVO) facility at Macungie near Allentown, Pennsylvania, which has recently benefited from $USD84 million in investment to streamline production and turn the factory into a modern facility, filled with light and the latest productions systems.

Just down the road at the Allentown Mack Customer Experience Centre, we had the chance to drive a couple of examples of the new Mack Anthem on the closed test track during freezing conditions and the start of a blizzard, coming away impressed, particularly with the new interior layout. Unlike present day Macks, the Anthem boasts a more user friendly cockpit with better switch gear, steering wheel mounted cruise control and audio controls, stalk mounted engine braking, lighting and turn indicators, better instrumentation and a race inspired flat bottomed steering wheel.

All of that comes along with the full stand up height cab and a new far more aerodynamic cab profile. 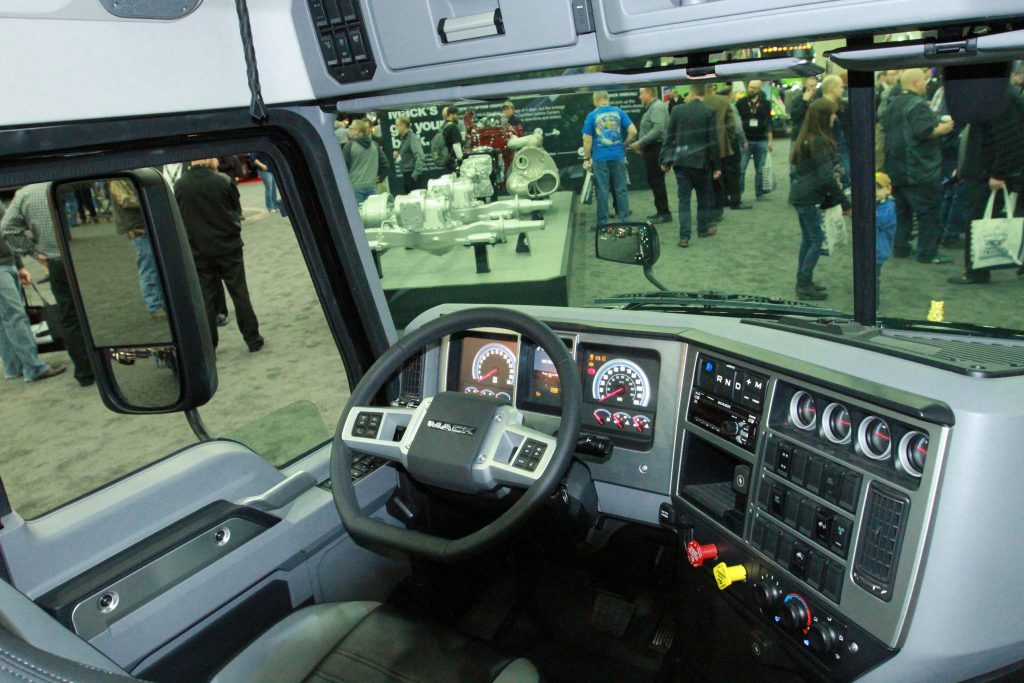 Given the sensitivities surrounding a 114 year old US truck brand that has as much heritage as Mack does, parent company Volvo has gone out of its way to make sure this new truck has received the sort of technology and ergonomics expected these days – well almost – while preserving the Mack identity and character.

We say – well almost – because while it has a full arsenal of new tech it still lacks SRS airbags, something Volvo would not leave out of any of its offerings these days. Jonathan Randall and his team say the airbags are on their way in coming iterations and evolutions of Anthem and other Macks but explained that the low overall use of seatbelts by US truck drivers meant airbags could be more a problem than a safety plus. The effect of an airbag on an unrestrained driver or passenger can cause major injuries so an education process is required. 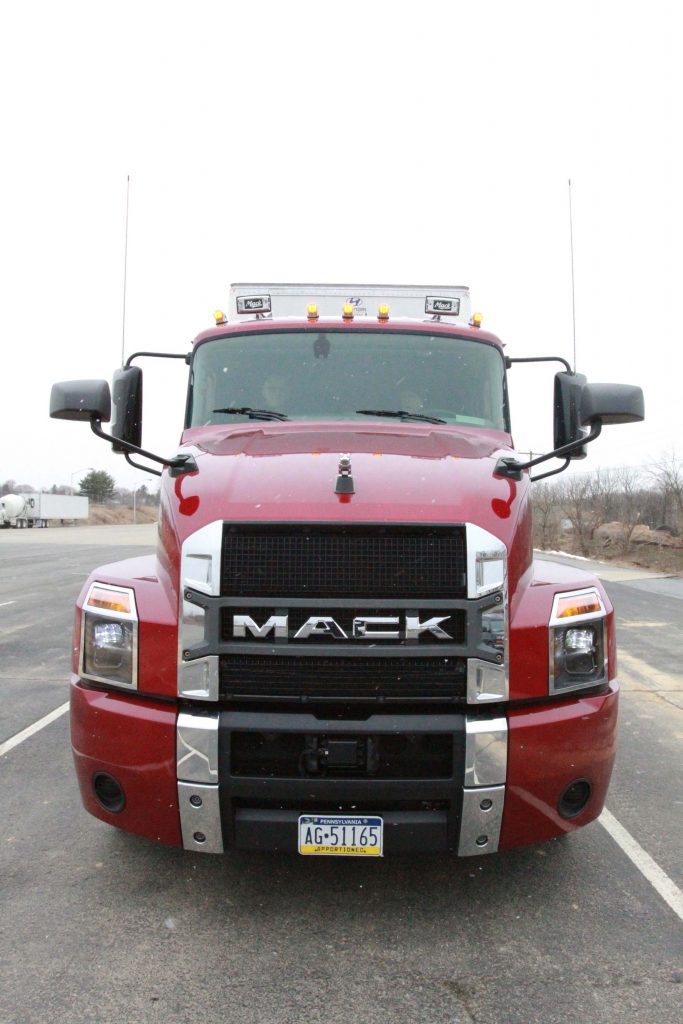 The Anthem’s distinctive new bonnet, still chiseled and strong but much more aerodynamically efficient than past models has resulted in a fuel saving of around 3 per cent on the sleeper cab models. The distinctive new grille and overall look is Mack’s to own.

Along with the new bonnet US Mack designers have come up with a new roof, chassis fairings, mirrors, and front bumper to reduce drag and make them more slippery.

“It doesn’t have to look like a jelly bean!” proffered Jonathan Randall. “It is a Mack first and foremost and one we are very proud of but it is also efficient and sets us up well for the bigger rule changes coming in the near future,” he added.

Exact details and specs for the anthem and the other Mack model updates are still a way off yet but Austrlaian buyers can expect the new dash, controls and the flat bottomed steering wheel while the new Mack nameplate will be on the anthem but may not immediately make it on to the other updated model grilles.

The Anthem will only come with the Mack MP8 engine, the Bulldog version of the Volvo family 13-litre with a maximum horsepower rating of 535hp. The bigger MP 10 in 600 plus horsepower iterations will be available in Anthem-ised SuperLiner and trident models. The M Drive AM/T will be the most likely transmission in most models, with the number of manual spec trucks now but a trickle from Mack plants both here and in the US.

The Knorr Bremse Wingman Fusion stability control and predictive cruise control system launched on Mack in Australia in 2016 is now standard on anthem in the US and will probably be the same when the truck comes down under.

The Anthem is an exciting step forward for Mack, we are keen to see exactly how it is rolled out in Australia but it is reason for Mack and its Australian truck buyers to be excited.

“This is a range renewal, not just a new truck for us, I don’t want to miss out on any volume in Australia and this will enable us to keep growing our volume as we have done in the last few years,” Dean Bestwick said. “Production is very fluid at the moment but as soon as we can get it we want it,” he added.

“We want everything that is relevant to the Australian market as soon as we can, we have delivered on everything we have promised with Mack in Australia and now it is time to get what we need,” said Bestwick with a broad smile.

From our perspective we hope that he gets exactly that and Australian truck buyers should be hoping the same.

WHILE the focus on alternative fuels over the past few months has been largely centred on electric vehicles, the fuel that many believe will be the real future of automotive movement, hydrogen has been given […]

FREIGHTLINERS NEW MAN AT THE WHEEL

MELBOURNE, AUSTRALIA Thanks to Cummins South Pacific, the Australian Trucking Association is now looking for three young service technicians from Australian workshops to receive full scholarships to attend the 2014 PACCAR & Dealer TMC. The […]