When the world’s largest truck manufacturer  declares its hand and announces a hydrogen fuel cell powered future for its heavy duty long distance trucks then you know the technology is no longer the province of dreamers and self promoters.

Daimler  unveiled its  technology strategy for the electrification of  its next generation trucks in Berlin this week, unveiling a range of electric powered trucks  that span from urban distribution to long-haul heavy duty transport.

The German automotive giant underlined its  commitment to achieving the goals of the Paris Climate Convention.

Daimler’s unveiling came a week before it would have shown the new technology to the world at the Hanover IAA truck show, which was scheduled for next week, but which has now been cancelled due too Covid.

The Daimler  event particularly focused on  hydrogen-based fuel-cell the technology for long-haul transport  revealing its Mercedes-Benz GenH2 concept truck, which the company says  ‘;marks the beginning of its fuel-cell drive’.

With the GenH2 Truck, Daimler Trucks says it  is demonstrating for the first time which specific technologies it is ‘driving forward’ so that heavy-duty fuel-cell trucks can perform flexible and demanding long-distance haulage operations with ranges of up to 1,000 kilometres and more on a single tank of hydrogen.

Daimler says it plans to begin customer trials of the GenH2 Truck in 2023, with the company being a little less specific about the commencement  of  series production, simply saying it is set to start in the ”second half of the decade”. 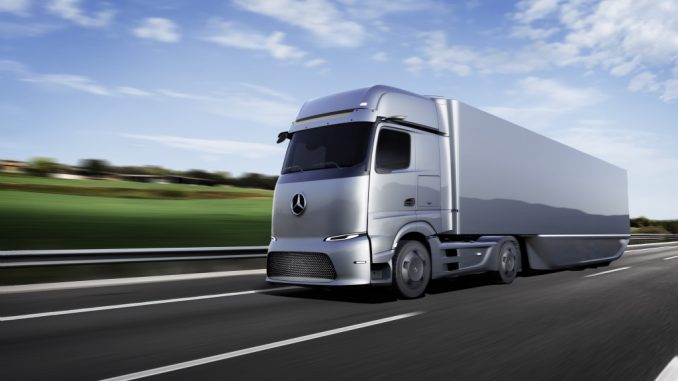 It is clearly not putting all its eggs in the hydrogen basket, also presenting a preview of a purely battery-powered long-haul truck, the Mercedes-Benz eActros LongHaul, which it says is designed to cover regular journeys on plannable routes in “an energy-efficient manner”.

It says it plans to have the eActros LongHaul ready for series production in 2024, with a range on one battery charge of approximately 500 kilometres. As well as that, the Mercedes-Benz eActros, it unveiled two years ago, and which it says has already been extensively tested by customers in normal operations for distribution transport, will start series production of this purely battery-powered heavy-duty truck next year. The company predicts the range of the series-production eActros on one battery charge will be significantly better than the  prototype’s 200 kilometres.

Daimler indicated that  is pursuing similar electric vehicle schedules for its North American and Japanese markets as it is for Europe, and says that by 2022, its portfolio in its main sales regions – Europe, the USA and Japan – will include series-production trucks with battery-electric drive, and added that its ambition is to offer only new trucks that are CO2-neutral in driving operation – “from tank to wheel”- in these main markets by 2039.

The company revealed that a new worldwide modular architecture platform , which it has dubbed ‘ePowertrain’,  will be the technological basis for all its medium- and heavy-duty CO2-neutral, electric trucks, whether they’re powered  by batteries or by hydrogen-based fuel cells. The company claims it  will feature ‘high levels of performance, efficiency and durability’, while achieving synergies and economies of scale for all relevant vehicles and markets.

“This combination enables us to offer our customers the best vehicle options, depending on the application. Battery power will be used for lower cargo weights and for shorter distances, while fuel-cell power will tend to be the preferred option for heavier loads and longer distances,” said Daum.

“Our customers make rational purchasing decisions and are unwilling to compromise on their trucks’ suitability for everyday use, tonnage and range. With our alternative drive concepts from Mercedes-Benz – the GenH2 Truck, the eActros LongHaul and the eActros – and our electric trucks of the Freightliner and FUSO brands, we have a clear focus on customer requirements and are creating genuine locally CO2-neutral alternatives for them,” said Daum. 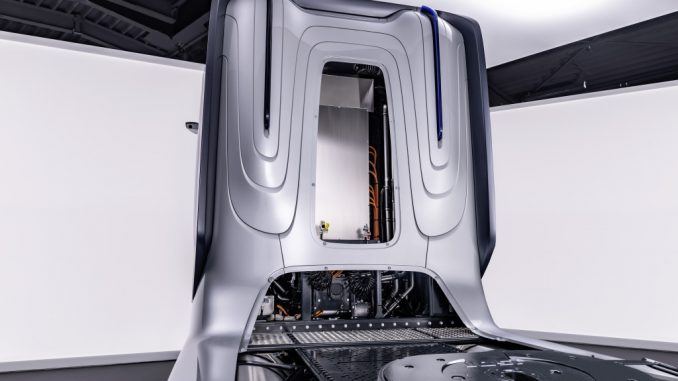 “We have now set out the key technological specifications of our electric trucks so that the requirements are known to everyone involved at an early stage. It is now up to policymakers, other players and society as a whole to provide the right framework conditions,” he added.

“To make CO2-neutral all-electric vehicles competitive, regulatory and government action is needed, including the necessary infrastructure for charging with green electricity and for the production, storage and transport of green liquid hydrogen,” Daum continued.

Germany’s Federal Transport minister, Andreas Scheuer, who was on hand at the announcement in Berlin,  said we need zero-carbon goods vehicles on our roads.

“These include hydrogen fuel cell trucks, and there is huge potential inherent in hydrogen for the protection of our environment and a strong economy,” Scheuer said.

“That is why we have been funding hydrogen as a transport fuel for more than ten years , and an example is the concept truck presented here today,” he added.

Daimler says the brief to its development engineers was to base the GenH2 Truck on the capabilities of the conventional Mercedes-Benz Actros long-haul truck, with regard to tractive power, range, and performance.

It says that the series-production versions of the GenH2 Truck have been designed with a gross vehicle weight of 40 tonnes and a payload of 25 tonnes, while  two special liquid-hydrogen tanks will be combined with a particularly powerful fuel-cell system to make the high payload and long range possible, and will be the core of the GenH2 Truck concept.

The advantage that Daimler brings  to the zero emission truck arena is  the fact that it  can draw on its existing expertise in the development of hydrogen fuel cell systems , as well as revealing it  is cooperating closely with a partner.

Specifically with fuel cells, Daimler’s experts have decades of experience, with the technology, dating back to the late 1970s,  as well as in terms of production methods and processes.

Of course in April this year, Daimler announced it had entered a non-binding agreement with the Volvo Group to establish a new joint venture for the development ‘to series maturity, production and commercialisation of fuel-cell systems for use in heavy-duty commercial vehicles and other applications’.

Daimler says that combining resources with Volvo Group  will decrease development costs for both companies and accelerate the market introduction of fuel cell systems.

The company says the joint venture will benefit from the expertise of Daimler and Volvo and to facilitate the joint venture with the Volvo Group, it has brought together all its fuel-cell activities across the group and placed them in a newly founded subsidiary Daimler Truck Fuel Cell GmbH & Co. KG.

Daimler says that it will use liquid hydrogen (LH2), because it has a far higher energy density compared with  hydrogen gas and as a result the liquid hydrogen tanks are much smaller and significantly lighter due to the lower pressure, ensuring better payload and more cargo space.

This gives the trucks a larger cargo space and higher payload weight. At the same time, more hydrogen can be carried, which significantly increases the trucks’ range. This makes the series GenH2 Truck, like conventional diesel trucks, suitable for multi-day, difficult to plan long-haul transport and where the daily energy throughput is high. 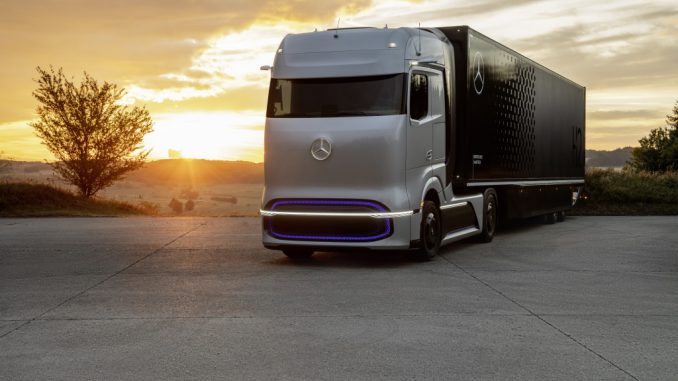 The company says it is pressing ahead with the development of the necessary tank-system technologies to make liquid hydrogen usable  in mobile  fuel-cell trucks, adding that the storage of ‘cryogenic’ liquid hydrogen at -253 degrees Celsius is already common practice in stationary applications, such as at hydrogen filling stations. and in the transport of liquid hydrogen as cargo.

Daimler indicated that the two stainless-steel liquid-hydrogen tanks intended for the production GenH2 Truck will have a total storage capacity of 80 kilograms (40 kg each), with each stainless-steel tank system consisting of two tubes, one within the other, connected to each other and vacuum-insulated.

It says the GenH2 truck fuel-cell system will supply two 150 kilowatt motors  and the battery is to provide an additional 400 kW temporarily. At 70 kWh, the storage capacity of the battery is relatively low, as it is not intended to meet energy needs, but mainly to be switched on to provide situational power support for the fuel cell, for example during peak loads while accelerating or while driving uphill fully loaded. At the same time, the relatively light battery allows a higher payload. It is to be recharged in series-production vehicles with braking energy and excess fuel-cell energy. A core element of the sophisticated operating strategy of the fuel-cell and battery system is a cooling and heating system that keeps all components at the ideal operating temperature, to ensure maximum durability. The production truck will have two electric motors  each putting out 230 kW (460kW total) of  continuous power and 330 kW maximum power (660kW total), while  the electric motors will each deliver continuous torque  of 1577 Nm ( 3154Nm total)  and 2071 Nm  of maximum torque (4142Nm total).

The company says its Mercedes-Benz eActros LongHaul battery-powered truck will be in the same vehicle class as the GenH2 and will boast a 500 km range  on one charge delivering high energy efficiency from one battery. It has been configured around EU driving rest requirements which call for a 45 minute break every 4.5 hours, with the 45 minute break being enough  given new charging technology to replenish the battery for another 4.5 hours of running.

Daimler believes he eActros LongHaul will  be the right choice for regular use on planner routes, distances and charging possibilities.

Daimler says the Long Haul will be on the market by around 2025 allowing the required charging infrastructure to be set up sooner at comparatively low cost in transport company depots. It says Depot charging is the most important step for adoption of the eActros LongHaul, while another key component will be ‘opportunity’ charging for range extension, where the truck can be recharged while unloading or loading. The company also believes that in the future, public charging at  accessible stations on transport routes will also become increasingly important while new, more durable batteries will also contribute to the competitiveness of battery-electric trucks, reducing total cost of ownership over a vehicle’s lifecycle says the company.

The eActros will be on a par with a conventional Actros also in terms of payload says Daimler and will be launched as a two-axle and three-axle truck a ‘holistic ecosystem’ that includes consulting services for electric mobility, such as analysing routes, checking possible subsidies, supporting operational fleet integration and developing suitable charging-infrastructure solutions embedded it the trucks control system.

The company says its Mercedes-Benz eEconic low-floor truck, aimed at the waste industry  and  based on the eActros   will go into production in  2022. designed for the comparatively short, planned routes of up to about 100 kilometres and a high proportion of stop-and-go operation faced by waste trucks.

a total of 170 Fuso eCanters are currently in use in with numerous customers in Japan, the US and Europe; the first of them handed over to customers in 2017. The eCanter offers a range of 100 km.

Meantime at Daimler Buses, the Mercedes-Benz eCitaro has been in production since the late 2018 and it will be followed in 2022 by a hydrogen fuel cell version as a range extender.

Daimler says it is pursuing a ‘holistic and global’ method with its electric trucks focussing on individual customer needs  and with the weight it brings to the zero emission concept there would be amore than a few nervous sleepless nights for some of the battery  electric and hydrogen fuel cell start up companies.

it will be fascinating to see how the introduction of the new technology pans out.

The Transport Workers’ Union  has fired a salvo at  the ATA  and called  for a change of direction given recent changes of leadership at the industry body. The TWU has called for the ATA to […]