Fuso has announced it has launched the all-electric version of its light duty truck, the eCanter, becoming the first OEM to launch a truck like this under its own brand in Australia.

It follows the launch last week of SEA Electric’s 300 and 500 series  trucks based on a Hino SKD kit assembled at its Mebourne factory.

While the eCanter, produces zero local emissions like the SEA trucks, the Fuso retains the full suite of safety equipment in what Daimler says, “heralds a new age of electric mobility in Australian cities”.

At a launch event in Melbourne today, the company also introduded  the new director of Fuso Truck and Bus, Alecander Müller, whose appointment has taken more than12 months to fulfill as a result fo Covid restrictions.

Müller comes to the role from his native Germany where he has previously run the Fuso brand for Daimler in Europe with some success establishing a  a record for the brand, selling 10,000 units in Germany.

Daimler says the new eCanter is the first Original Equipment Manufacturer (OEM) all-electric truck available in Australia and it will be supported by select Fuso eMobility dealers. 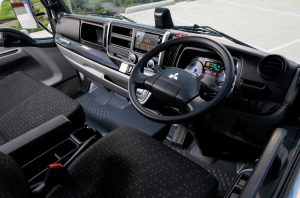 Customers will not buy the eCanter, rather Daimler will lease the trucks on a fully maintained operating lease ove six years, insulating buyers from any unexpected costs or issues.

While regular diesel powered Canters sold in Australia are produced in Fuso’s Kawasaki plant in Japan, Australian eCanters are built at the Tramagal factory in Portugal.

The company says the truck was developed with the global engineering might of Daimler,  and it became the world’s first small series electric production truck back in 2017 when it was launched in the USA.

Daimler says it has been the subject of a rigorous testing regime around the world, including a six-month Australian test running with a maximum load, while global customers have covered more than three million kilometres of real world driving.

Daimler Truck and Bus president and CEO, Daniel Whitehead, says the launch of the eCanter in Australia is a momentous occasion.

“This is a significant milestone for Australian transport and represents a big step towards carbon neutral transportation in this country, which benefits everyone.”

Alex Müller, said he is excited to be able to offer the eCanter to Australian customers.

“The eCanter is perfect for emission-sensitive areas in our big cities, where many pedestrians and residents stand to benefit, but it is not just a concept truck or environmental tribute,” he said.

“It is a serious truck with a payload of more than four tonnes and it gets the job done day and night.” 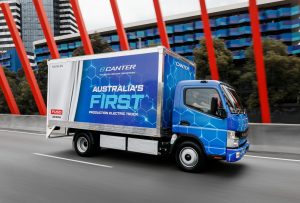 Müller says the eCanter is proving that all-electric local transportation makes sense; not just for the community and for the environment, but also for business.

“We are excited to be pioneers in this field and to prove that electric trucks are practical in the correct application right now,” he said.

“The eCanter is a vital proposition for any company that is serious about reducing emissions,” Müller added.

The eCanter is equipped with active safety features such as the Advanced Emergency Braking System and the Lane Departure Warning System, which are increasingly important for leading companies and government bodies with a firm focus on health and safety.

Müller said customers of the eCanter “can rest assured the truck is fitted with advanced pedestrian-sensing camera emergency braking technology, just like the regular Canter 4×2 range”.

“By their very nature, electric trucks operate in high-density urban areas, so active safety systems are more important than ever,” he said.

“Our customers do not have to choose between safety and electric mobility, they can have both,” Müller added.

Fuso claims the eCanter has a range of more than 100km when fully loaded, and can be recharged to 80 per cent capacity in an hour using a 50kW rapid charger or fully charged in 90 minutes. This makes it the perfect solution for set loops in big cities, where the truck’s zero local emissions and near-silent operation will be most appreciated.

Daimler Trucks’ says the eCanter is part of its commitment to help customers reduce emissions in Australia with its Fuso, Freightliner and Mercedes-Benz brands.

To back this up Daimnler emphasises that Freightliner’s Cascadia was the first conventional truck in Australia with the US GHG 17 emission rating (exceeding Euro 6), while Mercedes-Benz led the way by introducing Euro 6 on every Actros model in 2016.

Daimler Trucks says it aims to have all new vehicles in Europe, North America, and Japan “tank-to-wheel” CO2-neutral by 2039.

“Our leading customers in Australia want reduced emissions and advanced safety and Daimler Truck and Bus is committed to lead the market in delivering both,” Daniel Whitehead said. 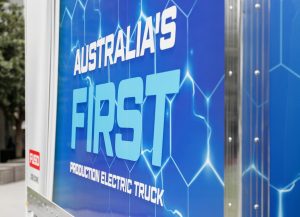 The eCanter  uses six liquid-cooled lithium ion batteries mounted in its frame, which store 82.8kW/h of electricity (with 66kW/h of usable power) while feeding a permanent magnet synchronous motor.

Fuso state power output is rated at 135kW, while 390Nm of torque can be delivered the moment the accelerator pedal is pressed.

Fuso says it will consult with customers and advise them on the optimal charging infrastructure for their specific needs.

The company says  that given the global popularity of the eCanter, a limited number will be available for customers in Australia during the initial stages of the introduction but production availability is expected to increase in time.

“We have more customers for the eCanter than we have trucks  and  we will be selective about who we sell them too, because it I not going to suit every application,” said Daniel Whitehead.

Daimler says that like all 4×2 Canters the eCanter is equipped with  Electronic Stability Control, Hill Start, a reversing camera and driver and passenger airbags, in addition to Advanced Emergency Braking System and Lane Departure Warning System as standard  and at no extra cost to customers.

Drivers of the regular Canter will be familiar with the cabin  which ostensibly  is the same as other Canters, but features a unique instrument cluster that shows the vehicle range and how much energy is being recouped through regenerative braking when the vehicle slows. It also features an ISRI suspension driver’s seat that is unique to eCanter.

Daimler is working closely with Australian recharging specialist, JetCharge  to provide customers with charging solutions and systems to suit specific needs. JetCharge’s director, Tim Washington was on hand to talk about how it  wil be able to help companies with the most efficient way of charging their  vehicles in an ever changing electric vehicle and tech landscape.

In the wake of the massive global emissions scandal Volkswagen has admitted it is exploring options for growth in its heavy-truck division that could include acquisitions and an initial public offering (IPO). VW global trucks […]

The ATA has issued a statement criticising Austroads for limiting its research project into heavy vehicle dimensions to a 2.55metre rule and ignoring the findings of an expert panel inquiry into national freight and supply […]

US BEGS FOR UPSIZE TO TRUCKS

A coalition of food and agricultural haulers is pushing to supersize the weight limit for trucks in the USA. More than 80 groups have proposed a 15-year trial which would see the maximum GVM upped […]