Amidst the lockdowns Volvo Group has used Facebook Live to stage the Australian media reveal and walkaround of the company’s latest and long awaited UD model, the Croner.

UD has not had a lower medium contender  for almost a year as the production of the Croner was switched from Japan to the UD plant in Thailand but now it is here and the details were revealed in the 11 minute live walkaround on the Facebook page.

The smart looking Croner is a new nameplate  on the Australian market for what used to be just known by the model letters PK and PD or as the Condor. The  new UD Croner will be available in two models, the 4×2 PK and the 6×4 PD, both powered by the 280hp 8-litre GH8E.

The 8-litre turbo diesel boasts 1050 Nm of torque, up significantly on the 883 Nm which was offered by the previous 7-litre UD medium duty turbo diesel, while max torque is now available from 1100rpm, ensuring better flexibility and fuel efficiency according to UD.

The Croner will only be available with one transmission, the six speed Allison 3000 series automatic.  UD was a pioneer of  the Allison automatic in medium duty around 12 years ago and  the success of that strategy has really changed the transmission landscape in the medium-duty Japanese sector in this country. So much has this influenced uptake that  other brands including Hino, Fuso and Isuzu have all embraced the US autos, with Hino quoting up to 80 per cent of its 500 series now being fitted with Allison autos.

Both Croner models come with either multi leaf rear suspension or can be equipped with optional airbag rear suspension, with a cabin mounted ride height controller being a feature that UD points out is more commonly seen on European trucks.

The Croner PK 4×2 boasts 17.5 tonnes GVM while the PD 6×4  offers a 24.,5 tonne GVM  with both trucks specced with a 32.5 tonne GCM. Across the two models UD says there will 18 different  wheelbase options available to fit a variety of applications and customer requirements.

The Croner gets a single steering wheel mounted SRS airbag while the company says the cab us built  to  meet ECE 29 safety strength requirements and there are daytime running lights now also standard.

The latest UD electronic architecture links the Croner into the Volvo Group telematics system with a gateway allowing it to talk to rest of the VGA family, allowing buyers  who may have Volvos or Macks in their fleets to link the new UDs directly into  their existing Volvo telematic platform. There is also a USB portal on the dash that enables drivers to plug into with their driver ID fob and log their profile on to the telematics system as they already can with the Mack Telematics and Volvo Dynafleet portals. 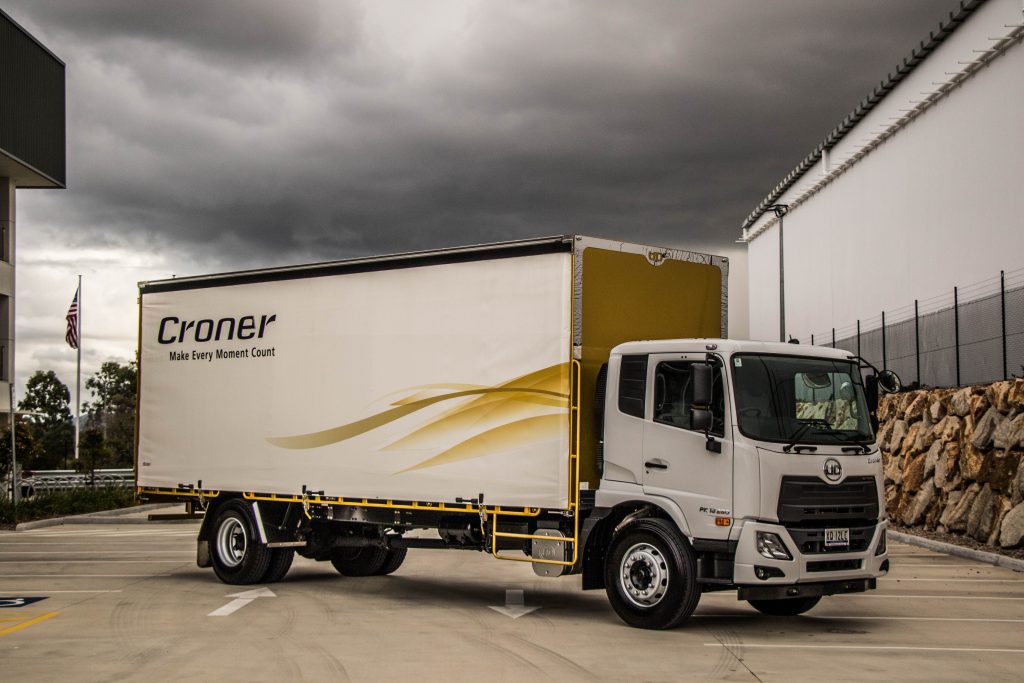 The Croner’s also get an LED  screen AV unit in the middle of the dash with inputs for up to five external cameras as well boasting a built in Sat/Nav and the normal radio and audio offerings including Bluetooth connectivity.

The Cromer comes standard with a three year/300,000km warranty and a three year unlimited corrosion warranty, while a three year/500,000km extended warranty can also be purchased.

While the first examples of the new Croner have arrived  in Australia UD says  that supply is limited during the early stages of  its launch particularly with the current Covid 19 crisis supply issues.

Like all truck makers UD was not quoting prices with Volvo Group PR spokesperson Matt Wood saying that pricing  as you would expect depends a lot on “how many you want to buy”.

Just two months after purchasing autonomous truck start-up Otto, Uber has vowed to have shake-up the US trucking industry next year, and plans to have self-driving trucks on highways. Uber bought Otto for $680 million […]

After running two cars in Shell livery at  the opening round in Adelaide, DJR TEAM Penske will run  two different  colour schemes for its  cars at the Australian Grand Prix this weekend, both  of which […]

The NHVR has  announced it has approved  a fifth Electronic Work Diary (EWD) option for heavy vehicle drivers  with the approval of the Quallogi  system by Kynection, which is in fact the first approved EWD system […]